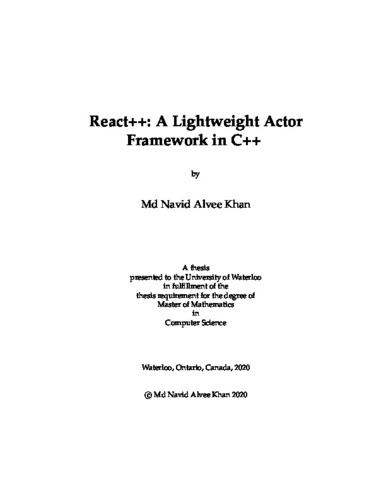 Distributed software remains susceptible to data races and poor scalability because of the widespread use of locks and other low-level synchronization primitives. Furthermore, using this programming approach is known to break encapsulation offered by object-oriented programming. Actors present an alternative model of concurrent computation by serving as building blocks with a higher level of abstraction. They encapsulate concurrent logic in their behaviors and rely only on asynchronous exchange of messages for synchronization, preventing a broad range of concurrent issues by eschewing locks. Existing actor frameworks often seem to focus on CPU-bound workloads and lack an actor-oriented I/O infrastructure. The purpose of this thesis is to investigate the scalability of user-space I/O operations carried out by actors. It presents an experimental actor framework named React++, with an M:N runtime for cooperative scheduling of actors and an integrated I/O subsystem. Load distribution is policy-driven and uses a variant of the randomized work-stealing algorithm. The evaluation of the framework is carried out in three stages. First, the efficiency of message delivery, scheduling and load balancing is assessed by a set of micro-benchmarks, where React++ retains a competitive score against several well-known actor frameworks. Next, a web server built on React++ is shown to be on par with its fastest event-driven counterparts in the TechEmpower plaintext benchmark. Finally, the runtime of an existing messaging library (ZeroMQ) is augmented with React++, replacing the backend and delegating all network I/O to actors without incurring any substantial overhead.