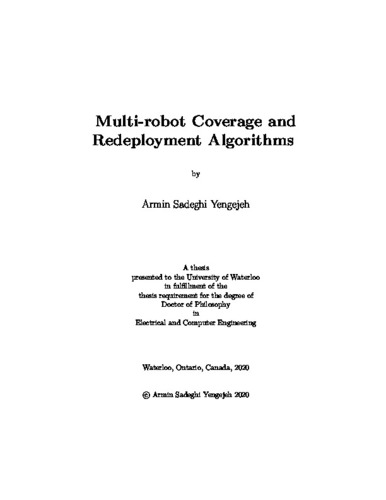 In this thesis, we focus on two classes of multi-robot task allocation and deployment problems motivated by applications in ride-sourcing transportation networks and service robots: 1) coverage control with multiple robots, and 2) robots servicing tasks arriving sequentially over time. The first problem considers the deployment of multiple robots to cover a domain. The multi-robot problem consists of multiple robots with sensors on-board observing the spatially distributed events in an environment. The objective is to maximize the sensing quality of the events via optimally distributing the robots in the environment. This problem has been studied extensively in the literature and several algorithms have been proposed for different variants of this problem. However, there has been a lack of theoretical results on the quality of the solutions provided by these algorithms. In this thesis, we provide a new distributed multi-robot coverage algorithm with theoretical guarantees on the solution quality, run-time complexity, and communication complexity. The theoretical bound on the solution quality holds for on-board sensors where the sensing quality of the sensors is a sub-additive function of the distance to the event location in convex and non-convex environments. A natural extension of the multi-robot coverage control problem is considered in this thesis where each robot is equipped with a set of different sensors and observes different event types in the environment. Servicing a task in this problem corresponds to sensing an event occurring at a particular location and does not involve visiting the task location. Each event type has a different distribution over the domain. The robots are heterogeneous in that each robot is capable of sensing a subset of the event types. The objective is to deploy the robots into the domain to maximize the total coverage of the multiple event types. We propose a new formulation for the heterogeneous coverage problem. We provide a simple distributed algorithm to maximize the coverage. Then, we extend the result to the case where the event distribution is unknown before the deployment and provide a distributed algorithm and prove the convergence of the approach to a locally optimal solution. The third problem considers the deployment of a set of autonomous robots to efficiently service tasks that arrive sequentially in an environment over time. Each task is serviced when a robot visits the corresponding task location. Robots can then redeploy while waiting for the next task to arrive. The objective is to redeploy the robots taking into account the next N task arrivals. We seek to minimize a linear combination of the expected cost to service tasks and the redeployment cost between task arrivals. In the single robot case, we propose a one-stage greedy algorithm and prove its optimality. For multiple robots, the problem is NP-hard, and we propose two constant-factor approximation algorithms, one for the problem with a horizon of two task arrivals and the other for the infinite horizon when the redeployment cost is weighted more heavily than the service cost. Finally, we extend the second problem to scenarios where the robots are self-interested service units maximizing their payoff. The payoff of a robot is a linear combination of its relocation cost and its expected revenue from servicing the tasks in its vicinity. In this extension, the global objective is either to minimize the expected time or minimize the maximum time to respond to the tasks. We introduce two indirect control methods to relocate the self-interested service units: 1) an information sharing method, and 2) a method that incentivizes relocation with payments. We prove NP-hardness of finding the optimal controls and provide algorithms to find the near-optimal control. We quantify the performance of the proposed algorithms with analytical upper-bounds and real-world data from ride-sourcing applications.