A Convergent Hierarchy of Certificates for Constrained Signomial Positivity 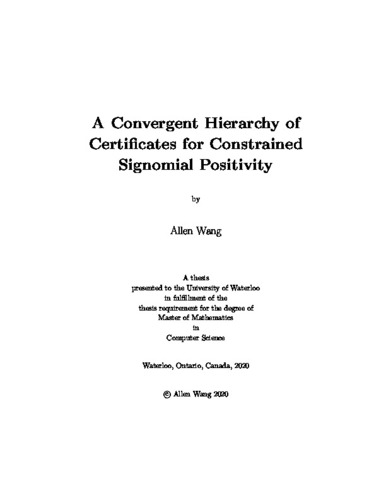 Optimization is at the heart of many engineering problems. Many optimization problems, however, are computationally intractable. One approach to tackle such intractability is to find a tractable problem whose solution, when found, approximates that of the original problem. Specifically, convex optimization problems are often efficiently solvable, and finding a convex formulation that approximates a nonconvex problem, known as convex relaxation, is an effective approach. This work concerns a particular class of optimization problem, namely constrained signomial optimization. Based on the idea that optimization of a function is equivalent to verifying its positivity, we first study a certificate of signomial positivity over a constrained set, which finds a decomposition of the signomial into sum of parts that are verifiably positive via convex constraints. However, the certificate only provides a sufficient condition for positivity. The main contribution of the work is to show that by multiplying additionally more complex functions, larger subset of signomials that are positive over a compact convex set, and eventually all, may be certified by the above method. The result is analogous to classic Positivstellensatz results from algebraic geometry which certifies polynomial positivity by finding its representation with sum of square polynomials. The result provides a convergent hierarchy of certificate for signomial positivity over a constrained set that is increasingly more complete. The hierarchy of certificate in turn gives a convex relaxation algorithm that computes the lower bounds of constrained signomial optimization problems that are increasingly tighter at the cost of additional computational complexity. At some finite level of the hierarchy, we obtain the optimal solution.