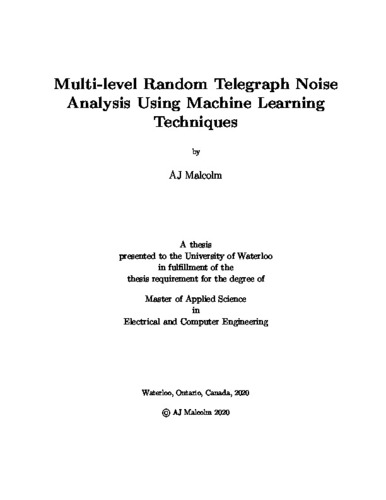 RTN is a noise process which occurs in solid-state electrical devices such as MOSFETs and Josephson Junctions. Defects in the crystal structure of these devices trap charge carriers, resulting in modulations of the devices electrical transport properties such as mobility mu or threshold voltage Vth. This is observed as sudden transitions between two discrete current, voltage, or resistance levels, corresponding to the occupied/unoccupied states of the trap. The magnitude of a traps effects can be linked to its physical location in devices, and so we sought to apply RTN analysis during the characterization of devices such as MOSFETs to learn more about its structure and any trap dependence on temperature or bias levels. However, device measurements demonstrated a large proportion of RTN signals with more than two levels, which strongly suggests the presence of multiple charge defects. This scenario is commonly avoided in published research on RTN analysis, with most literature focusing on measurements showing the effects of only a single trap. The frequency with which multiple traps was observed in our measurements motivated the development of an algorithm to better characterize multi-level RTN, and to avoid discarding large swathes of measurement data. The developed algorithm applies mixture models formed with Gaussians to identify, isolate, and analyze RTN signals. This is accomplished through the use of machine learning techniques to maximize the likelihood that a constrained combination of these models describes the RTN components at every step. When multi-level RTN is present, it is further decomposed into its constituent components which allows characterization of each independent defects. The algorithm is applied to a set of cryogenic MOSFET measurements taken from near cutoff and into saturation, which demonstrates the ability to characterize trap count, trap amplitude, and state occupation distribution for each trap. Although development of the algorithm has precluded an in depth exploration of the effects of parameters such as temperature on these traps, that type of analysis could not have been achieved to a suitable level of accuracy without it.