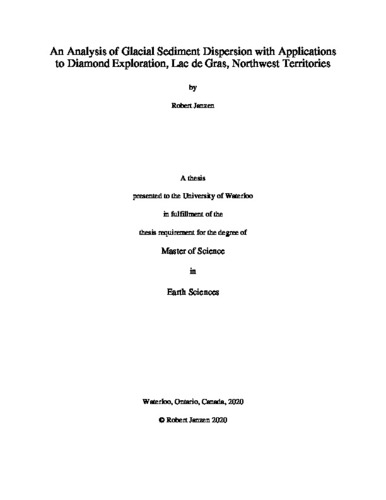 Diamond exploration is important to the economy of the Northwest Territories and Canada. In recent years, however, there has been a marked decline in the discovery rate of large diamond deposits. Emphasis is being put on improving geological models and developing new approaches of exploration in the hope of finding previously overlooked deposits. A proven approach in diamond exploration in the Northwest Territories and other similarly glaciated terrains has been to characterize the glacial cover to reveal secondary detrital dispersion of indicator minerals and geochemical pathfinders, which can help vector towards a buried kimberlitic source. Typically, only the surficial indicator mineral expression of a kimberlitic signature is known and mapped, which may lead to missed targets, especially in places with shifting ice flows and a complex glacial sedimentary record. This research, in the Lac de Gras area of Northwest Territories, uses a dataset containing both surface and subsurface data, from hand sampling and RC drilling, to bring new knowledge about the glacial geology and to improve our understanding of till production and related detrital dispersion in this prospective region. Erosional outcrop-scale paleo-ice flow indicators show an evolving history of ice-flow in a clockwise sequence starting in the southeast, then west, and finally to the northwest. The ice-flow indicators in the study area show that the northwest ice-flow phase is prominent accounting for 77% of all observations. The particle size distribution of surficial till samples is relatively homogenous, which lends support to the interpretation that the surface till forms a single till unit. The clast lithological analysis shows that the till contains all the different lithologies present in the study area in variable proportions, which appears to reflect a combination of processes and factors, such as bedrock hardness in the up-ice area versus in the dispersion area. The principal component analysis (PCA) of the major oxides shows the till is a mixture of the local bedrock material, but with end-member categories associated with the different bedrock lithologies mapped in the region. Notably, the till at depth, where till is thicker, appears to show a more distal signature than the overlying till or in areas of thin till. Kimberlite indicator mineral (KIM) patterns within the envelope of the Monument indicator train (MIT) indicate a shallow dispersal train that is best captured by surficial samples (i.e. max. depth of approx. 0.3m). The MIT is an area characterized by thin and highly discontinuous till and results show that the strong surficial dispersal from the Monument kimberlites only weakly extends in the shallow subsurface (i.e. below the first 0.3m). As a result, the MIT is not well-defined in the drill data. In addition, no clear palimpsest dispersal train associated with the older ice flow phases was found close to the Monument kimberlites. The till along the Coppermine indicator train (CIT) in the west-central portion of the study area is, on average, thicker than along the MIT. Results show a subsurface dispersal train that rises to the surface in the NW direction, consistent with the young NW ice flow phase and approximately parallel to the MIT. Also, there is a more subtle dispersal train extending to the SW that seems to start in the same area as the rising dispersal. This SW direction corresponds well with the oldest documented ice flow phase in the study area. The respective head of the two identified dispersal trains thus appear to be in the same area and suggest both dispersal trains emanate from the same local buried source. However, it is not possible to exclude the scenario of a more distal source, but it requires a more complex model involving sustained low effective stress and/or englacial transport during more than one ice flow phase. Till matrix geochemistry data that was available for this study proved to be of limited use for kimberlite dispersal train mapping and related glacial sediment transport reconstruction. A possible mixed signature from non-kimberlitic sources could not be separated. Therefore, the main available pathfinders for kimberlites also appear to trace dispersal trains from other rock sources such as mafic rocks and perhaps some metasedimentary rocks. Analysis of more elements using a total digestion procedure, along with multivariate analysis of the results, would be useful to further discriminate the more complex overlapping geochemical signatures. Overall, this study shows that the combined analysis of surface and subsurface till show some contrasting compositional characteristics, which may indicate more complex till stratigraphy or inheritance linked to older ice flow phases than previously considered. It may also have captured the signal of an unknown buried source, although this remains to be confirmed. This study suggests that drift prospecting may be enhanced in the Lac de Gras region by using more subsurface data and this could be critical for future success at the current maturity stage of the diamond district. It may be somewhat surprising given the till is typically relatively thin and discontinuous in this region, but it is clear that despite this situation, the few pockets of thicker till reveal more than what is recorded in the shallow and surficial till. Important corridors may be revealed where till is thicker on average and where surface landforms and bedrock depressions have possibly created till dispersal patterns that are different than the ones associated with previous discoveries.