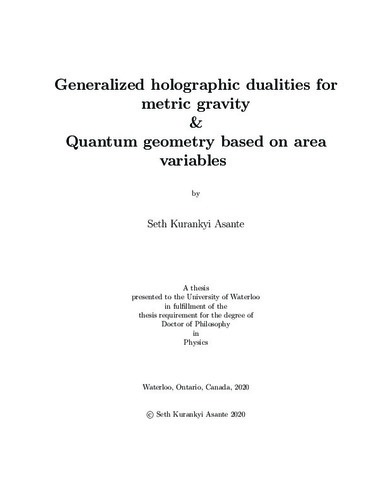 Holography holds promise for simplifying computations in quantum gravity. In part I of this thesis, we construct holographic boundary theories for linearized gravity, for a general family of finite or quasi-local boundaries, which capture diffeomorphisms acting on the boundary. These boundary theories are directly derived from the dynamics of general relativity by computing the effective action for a geometric boundary observable, which measures the geodesic length from a given boundary point to some centre in the bulk manifold. We identify the general form for these boundary theories and find that these are Liouville--like with a coupling to the boundary Ricci scalar. This is illustrated with various examples, each of which offers interesting insights into the structure of holographic boundary theories. We also compute the gravitational one-loop partition function for 4D linearized gravity, including graviton degrees of freedom via a recursion relation method. Furthermore, discretization of general relativity is a promising route towards quantum gravity. Discrete geometries have a finite number of degrees of freedom and can mimic aspects of quantum geometry. However, the selection of the correct discrete freedoms and description of their dynamics has remained a challenging problem. Again, several approaches to four-dimensional quantum gravity, such as loop quantum gravity and holography, situate areas as their fundamental variables. With these motivations, we explore in part II classical area Regge calculus, an alternative to standard Regge calculus where instead of lengths, the areas of a simplicial discretization are fundamental. There are a number of surprises: though the equations of motion impose flatness, we show that diffeomorphism symmetry is broken for a large class of area Regge geometries. This is due to degrees of freedom not available in the length Regge calculus. We enumerate and characterize these non-metric, or `twisted', degrees of freedom and provide tools for understanding their dynamics. The non-metric degrees of freedom also lead to fewer invariances of the area Regge action---in comparison to the length action---under local changes of the triangulation (Pachner moves). This means that invariance properties can be used to classify the dynamics of spin foam models. Our results lay a promising foundation for understanding the dynamics of the non-metric degrees of freedom in loop quantum gravity and spin foams. In the quantum theory, the choice of area variables kinematics can easily lead to gravitational dynamics peaked on flat space--times. We show that this is due to how regions are glued in the gravitational path integral via a discrete spin foam model. We introduce a family of `effective' spin foam models that incorporate a quantum area spectrum, impose gluing constraints as strongly as possible, and leverage the discrete general relativity action to specify amplitudes. These effective spin foam models avoid flatness in a restricted regime of the parameter space.