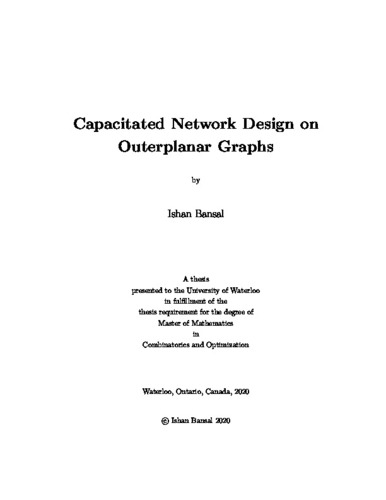 Network design problems model the efficient allocation of resources like routers, optical fibres, roads, canals etc. to effectively construct and operate critical infrastructures. In this thesis, we consider the capacitated network design problem (CapNDP), which finds applications in supply-chain logistics problems and network security. Here, we are given a network and for each edge in the network, several security reinforcement options. In addition, for each pair of nodes in the network, there is a specified level of protection demanded. The objective is to select a minimum-cost set of reinforcements for all the edges so that an adversary with strength less than the protection level of a particular pair of nodes cannot disconnect these nodes. The optimal solution to this problem cannot, in general, be found in reasonable time. One way to tackle such hard problems is to develop approximation algorithms, which are fast algorithms that are guaranteed to find near-optimal solutions; the worst-case ratio between the cost of the solution output by the algorithm and the optimum cost is called the approximation ratio of the algorithm. In this thesis, we investigate CapNDP when the network structure is constrained to belong to a class of graphs called outerplanar graphs. This particular special case was first considered by Carr, Fleischer, Leung and Philips; while they claimed to obtain an approximation ratio arbitrarily close to 1, their algorithm has certain fatal flaws. We build upon some of the ideas they use to approximate CapNDP on general networks to develop a new algorithm for CapNDP on outerplanar graphs. The approximation ratio achieved by our algorithm improves the state-of-the-art by a doubly exponential factor. We also notice that our methods can be applied to a more general class of problems called column-restricted covering integers programs, and be adapted to improve the approximation ratio on more instances of CapNDP if the structure of the network is known. Furthermore, our techniques also yield interesting results for a completely unrelated problem in the area of data structures.