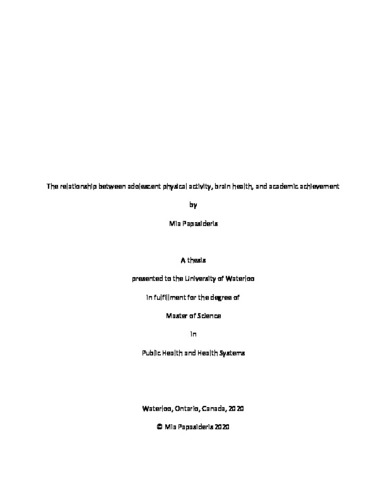 Background: In addition to the numerous physical and mental health benefits attributable to regular physical activity, physical activity has more recently been hypothesized to improve academic performance via its beneficial impact on cognitive control and activation within the prefrontal cortex (PFC). Other lifestyle behaviours such as substance use, sleep hours and a high calorie, low nutrient diet are also thought to be associated with brain health and academic performance in youth. Objective: The primary objective of this study is to examine the association between physical activity and academic performance in a sample of adolescents, and to examine the extent to which activity within the PFC and behavioural indices of inhibition may mediate this relationship. Secondary analyses investigate the potential mediation via brain health parameters on the relationship between lifestyle factors (i.e. substance use, fast-food consumption, average sleep hours) and academic performance. Methods: Using a prospective observational study, a total of 67 participants underwent two study sessions scheduled approximately 5 days apart. The first 20-minute session included the completion of a questionnaire pertaining to demographic information, health behaviours and academic performance as well as two mental health scales. Participants subsequently completed the Multi-Source Interference Task while functional Near-Infrared Spectroscopy measures of PFC oxygenation was used to infer activation in this area. Fitbit Inspire watches were also distributed to participants in order to measure physical activity and sleep hours. Results: Average active minutes were associated with greater % correct responses on the MSIT (β= .321, ρ= .019) as well as greater activation within the right dorsolateral PFC (β=.008 , SE= .004, ρ =.032), however there was no direct effect of physical activity on academic performance and no evidence of mediation through brain health parameters. The relationship between physical activity and task performance was moderated by gender (∆R2= .077, F= 4.939 (1, 54), ρ =.031), such that females had greater MSIT performance than males. Both fast-food consumption and substance use were negatively associated with % correct responses (β= -.307, ρ= .023) and Math grades (𝛽= -3.702, 𝑆𝐸= 1.563, ρ= .022) respectively. Conclusion: Overall, the results of this study indicate the importance of lifestyle behaviours on cognition and academic achievement in youth. There was evidence to support cognitive enhancements of physical activity, primarily for females, but these brain benefits did not translate into academic performance. These findings support prevention initiatives aimed enhancing cognition through physically activity, as well as those that aim to reduce the impact of fast-food consumption and substance use in adolescence.