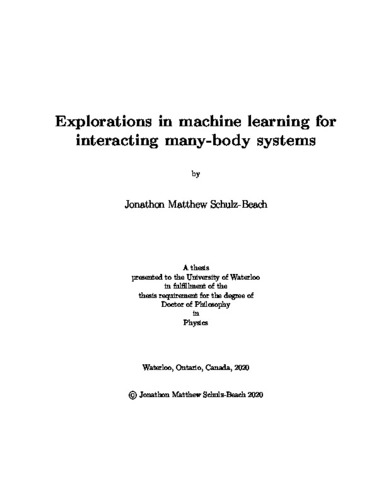 Most interacting many-body systems in physics are not analytically solvable. Instead, numerical methods are needed for the study of these complex and high-dimensional problems. At present, there are many interesting problems in strongly correlated systems that remain unsolved with current methods. At the heart of this problem is finding an efficient representation that incorporates symmetries, correlations and general features. In the context of computer science, machine learning techniques have had astonishing success at reducing the dimensionality of data. The leading method is through the use of artificial neural networks. These networks have been enormously successful at sifting through vast amounts of data to find patterns and regularities. In a sense, neural networks are themselves a statistical system whose properties are adjusted to mimic the features of the data. By finding an effective low-dimensional representation of the data, machine learning has greatly subdued the curse of dimensionality found in many real-world problems. In this Thesis, we apply several machine learning techniques to the study of interacting many-body systems in classical and quantum statistical physics. We explore supervised classification of phases of matter with an emphasis on physical interpretation of the net- work. In doing so, we design a custom network architecture that possesses rotational symmetry as an inductive bias. We further investigate connections between the renormalization group and deep learning through applying a super-resolving neural network to the classical Ising model. Towards experimental efforts, we also repurpose generative machine learning to quantum state tomography for the calibration and testing of quantum devices. We conclude with a latent variable model inspired by near-term quantum algorithms. This maps to a variational Monte Carlo ansatz that produces samples efficiently for interacting quantum systems.