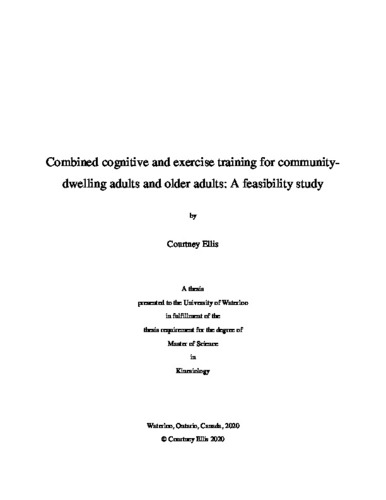 Older adults show cognitive improvements after taking part in exercise training or cognitive training. A number of studies suggest that combining these two types of interventions may lead to greater cognitive gains. However, trials that have done so have occurred in controlled experimental settings, so the effectiveness when translated to real-world settings is unclear. This study evaluated the feasibility of combining a cognitive training regimen (shown efficacious in trials) with a community exercise program for adults and older adults at augmented risk for dementia. The study was conducted in two phases. Phase 1 was a single-arm trial of 3-months of cognitive and exercise training (CET). Phase 2 was a quasi-experimental parallel-group trial where program times (Monday/Wednesday or Tuesday/Thursday) were randomized to either 3-month CET or exercise only (ExO) interventions. Community-dwelling adults and older adults eligible for the study and for the YMCA Move for Health exercise program were recruited. The feasibility outcomes were recruitment rate, study retention, adherence to intervention (attendance and completion of exercise diaries), and participant and instructor program acceptance (based on a satisfaction questionnaire). Exploratory outcomes including cognitive function, physical function, exercise-related self-efficacy and perceived well-being were also measured. Eleven participants were recruited to phase 1 of the study and 32 participants (16/group) were recruited to phase 2 of the study. The study met most a priori feasibility criteria, with the exception of recruitment rate and phase 2 retention. Recruitment rate was 1.8 participants/week in phase 1 and 3.2 participants/week in phase 2, well short of the 6 participants/week target. The most frequent reason for ineligibility was lack of willingness or ability to participate at designated program times. Retention rate was 91% in phase 1 and 72% in phase 2 (69% for CET and 75% ExO) (criterion for success was ≥ 75%). Adherence (attendance) rate was 79% for phase 1 and 73% for phase 2 (73% for CET and for ExO), respectively (criterion for success was ≥ 70%). Participant satisfaction was 4.5 of 5 in phase 1 and in phase 2 (4.5 for CET and 4.4 for ExO). Instructor satisfaction rating was 4.7 for phase 1 and 4.0 for phase 2 (3.9 for CET and 4.1 for ExO instructors) (criterion was ≥ 4 out of 5). No feasibility outcomes differed between the intervention groups. However, participants that were older, had more chronic health conditions, poorer baseline global cognition, and lower baseline physical activity were more likely to withdraw from the study, and had poorer adherence to study protocols, suggesting a need for additional supports for individuals with these traits. In addition, the lowest satisfaction rating was for the difficulty of cognitive and exercise training; for the cognitive training, many of those with high baseline global cognitive function did not feel sufficiently challenged. Though correlations in this small sample were not significant and likely driven by outliers, trends in this study suggest that having fewer chronic conditions may be associated with better cognitive outcomes and should be investigated in a future trial. The results of this study suggest that a pragmatic trial of CET may be feasible in a community setting, provided adjustments to recruitment strategies. This could include opening additional program time-slots, as lack of ability or willingness to participate at the set program time was the primary reason for participants not being recruited.