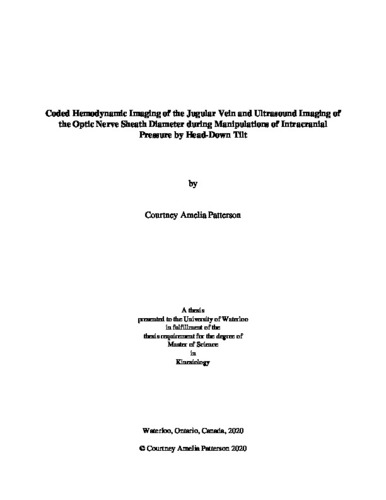 Background: Spaceflight associated neuro-ocular syndrome (SANS) is a condition in which worsening vision occurs while in microgravity. It has been hypothesized that SANS is caused by an increase in intracranial pressure (ICP) due to the cephalad fluid shift that occurs in microgravity, however, due to the invasive nature of ICP measurements, ICP cannot safely be measured in microgravity. Non-invasive estimates of ICP (nICP) act as surrogates for ICP, but few methods of nICP are validated and all currently involve an operator and contact with the skin. Indicators of cerebral venous congestion, such as internal jugular vein cross-sectional area (IJV CSA) and central venous pressure (CVP), have not been utilized to reflect changes in nICP to date, despite the association between IJV CSA, CVP and ICP. Coded Hemodynamic Imaging (CHI) is a novel, non-contact camera device which uses infrared light to “see” blood volume in the superficial vasculature and to track changes in the jugular venous pulse. By leveraging CHI’s ability to detect cardiovascular biomarkers of IJV hemodynamics, it was hypothesized that changes in jugular venous absorption (JVA) as measured by CHI would be associated with changes in nICP during head-down tilt (HDT), a common surrogate for microgravity. Objective: (1) To determine the ability of JVA, determined by CHI, to track changes in IJV CSA, CVP, and nICP during a severe cephalad fluid shift induced by 12° HDT and 30° HDT. (2) To determine the effect of a severe cephalad fluid shift on cerebral venous outflow (IJV CSA and IJV blood flow), and how those changes are associated with nICP. Methods: Eleven healthy young adults (5 female, 26±6 years, 166±10 cm, 64±11 kg) underwent ophthalmic ultrasound, IJV ultrasound and CHI imaging after 5-minutes in supine (baseline), and every 5-minutes up to 20-minutes in 12° HDT, 30° HDT and again in supine (recovery). Transcranial Doppler (TCD) continuously measured the velocity of the middle cerebral artery and 5 participants had CVP continuously monitored by a catheter in a right antecubital vein. Repeated measures correlation as well as individual regression were used to test the association between JVA and nICP as measured by nICP-TCD and optic nerve sheath diameter (ONSD). Linear mixed models were used to determine how IJV CSA, IJV blood flow, nICP-TCD and ONSD changed with HDT and over time. Repeated measures correlation was used to test the associations between IJV CSA, IJV blood flow, nICP-TCD, and ONSD. Results: JVA and IJV CSA had a moderate positive association (r<sub>rm</sub>=0.51, p<0.001; r<sub>mean</sub>=0.57, r<sub>median</sub>=0.78), as did JVA and CVP (r<sub>rm</sub>=0.48, p<0.001; r<sub>mean</sub>=0.45, r<sub>median</sub>=0.67, n=4). JVA and nICP-TCD had a weak positive association (r<sub>rm</sub>=0.28, p=0.003; r<sub>mean</sub>=0.24, r<sub>median</sub>=0.31) as did JVA and ONSD (r<sub>rm</sub>=0.17, p=0.078; r<sub>mean</sub>=0.09, r<sub>median</sub>=0.17). HDT had a significant main effect on IJV CSA (p<0.001), nICP-TCD (p<0.001), and ONSD (p<0.05) but not on IJV blood flow (p=0.70). Time had no significant main effect on any variable. IJV CSA and nICP-TCD significantly increased at 30° HDT compared to baseline (p<0.001) but did not result in a significant change in IJV blood flow or ONSD. Conclusions: JVA, determined by CHI, was moderately associated with both IJV CSA and CVP, suggesting that CHI-derived-JVA can track changes in cardiovascular biomarkers during a severe cephalad shift. However, JVA had a weak association with nICP, suggesting that CHI-derived-JVA does not provide the same information as nICP. Due to the limitations of nICP, future studies should determine the association between JVA and invasive ICP to better determine the ability of CHI to be an nICP surrogate. Lastly, while IJV CSA and nICP-TCD significantly increased with 30° HDT, IJV blood flow remained the same, suggesting that the relationship between IJV hemodynamics, cerebral venous congestion and nICP during a cephalad fluid shift is more complex than what these measures can capture alone. Future work should focus on identifying abnormal IJV flow patterns with severe cephalad fluid shift, and how these patterns impact nICP.