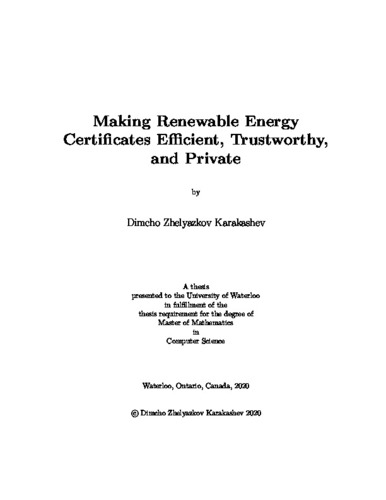 Although renewable energy costs are declining rapidly, producers still rely on additional incentives, such as Renewable Energy Certificates (RECs), when making an investment decision. An REC is a proof that a certain amount of energy was generated from a renewable resource. It can be traded for cash in an REC market. Unfortunately, existing mechanisms to ensure that RECs are trustworthy---not fraudulently generated and from a universally-agreed renewable energy source---require periodic physical audits of the generation plant, which adds costly administrative overheads and locks out small producers. Although prior work has attempted to address these issues, existing solutions lack privacy and are vulnerable to tampering. In this work, we design, implement, and evaluate a system that is efficient, trustworthy, and anonymous, thus opening the REC market to small-scale energy producers. We describe two implementations based on a commercially-available Azure Sphere microcontroller unit combined with a permissioned Blockchain, Hyperledger Fabric, and a permissionless Blockchain, Algorand.