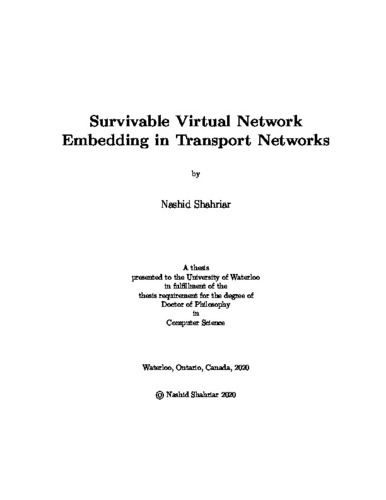 Network Virtualization (NV) is perceived as an enabling technology for the future Internet and the 5th Generation (5G) of mobile networks. It is becoming increasingly difficult to keep up with emerging applications’ Quality of Service (QoS) requirements in an ossified Internet. NV addresses the current Internet’s ossification problem by allowing the co-existence of multiple Virtual Networks (VNs), each customized to a specific purpose on the shared Internet. NV also facilitates a new business model, namely, Network-as-a-Service (NaaS), which provides a separation between applications and services, and the networks supporting them. 5G mobile network operators have adopted the NaaS model to partition their physical network resources into multiple VNs (also called network slices) and lease them to service providers. Service providers use the leased VNs to offer customized services satisfying specific QoS requirements without any investment in deploying and managing a physical network infrastructure. The benefits of NV come at additional resource management challenges. A fundamental problem in NV is to efficiently map the virtual nodes and virtual links of a VN to physical nodes and paths, respectively, known as the Virtual Network Embedding (VNE) problem. A VNE that can survive physical resource failures is known as the survivable VNE (SVNE) problem, and has received significant attention recently. In this thesis, we address variants of the SVNE problem with different bandwidth and reliability requirements for transport networks. Specifically, the thesis includes four main contributions. First, a connectivity-aware VNE approach that ensures VN connectivity without bandwidth guarantee in the face of multiple link failures. Second, a joint spare capacity allocation and VNE scheme that provides bandwidth guarantee against link failures by augmenting VNs with necessary spare capacity. Third, a generalized recovery mechanism to re-embed the VNs that are impacted by a physical node failure. Fourth, a reliable VNE scheme with dedicated protection that allows tuning of available bandwidth of a VN during a physical link failure. We show the effectiveness of the proposed SVNE schemes through extensive simulations. We believe that the thesis can set the stage for further research specially in the area of automated failure management for next generation networks.