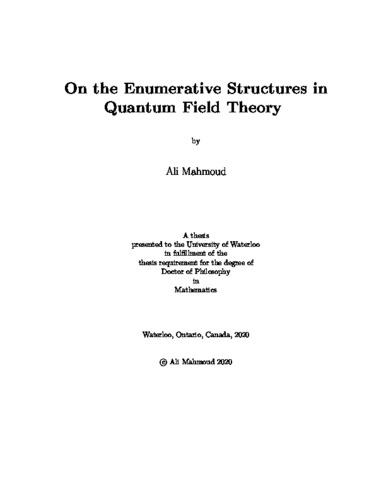 This thesis addresses a number of enumerative problems that arise in the context of quantum field theory and in the process of renormalization. In particular, the enumeration of rooted connected chord diagrams is further studied and new applications in quenched QED and Yukawa theories are introduced. Chord diagrams appear in quantum field theory in the context of Dyson-Schwinger equations, where, according to recent results, they are used to express the solutions. In another direction, we study the action of point field diffeomorphisms on a free theory. We give a new proof of a vanishing phenomenon for tree-level amplitudes of the transformed theories. A functional equation for $2$-connected chord diagrams is discovered, then is used to calculate the full asymptotic expansion of the number of $2$-connected chord diagrams by means of alien derivatives applied to factorially divergent power series. The calculation extends the older result by D. J. Kleitman on counting irreducible diagrams. Namely, Kleitman's result calculates the first coefficient of the infinite asymptotic expansion derived here and is therefore an approximation of the result presented. In calculating the asymptotics this way we are following the approach M. Borinsky used for solving the asymptotic counting problem of general connected chord diagrams. The numbers of $2$-connected chord diagrams and the sequence of coefficients of their asymptotic expansion amazingly also appeared, without being recognized, in more physical situations in the work of Broadhurst on 4-loop Dyson-Schwinger-Johnson anatomy, and among the renormalized quantities of quenched QED calculated by M. Borinsky. The underlying chord-diagrammatic structure of quenched QED and Yukawa theory is unveiled here. Realizing this combinatorial structure makes the asymptotic analysis of the Green functions of these theories easier, and no longer requires singularity analysis. As a subsidiary outcome, a combinatorial interpretation of sequence \href{https://oeis.org/A088221}{A088221} in terms of chord diagrams is obtained from analysing some of the expressions in the asymptotic expansion of connected chord diagrams in the work of M. Borinsky. Lastly, a problem from another context is considered. The problem was to reprove the cancellation of interaction terms produced by applying a point field diffeomorphism to a free field theory. The original proof by D. Kreimer and K. Yeats was intricate in a way that did not provide much insight, and, therefore, a proof on the level of generating functions was desired. This is what we do here. We show that the series of the tree-level amplitudes is exactly the compositional inverse of the diffeomorphism applied to the free theory. The relation to the combinatorial Legendre transform defined by D. Jackson, A. Kempf and A. Morales is outlined although still not settled. Simple combinatorial proofs are also given for some Bell polynomial identities.