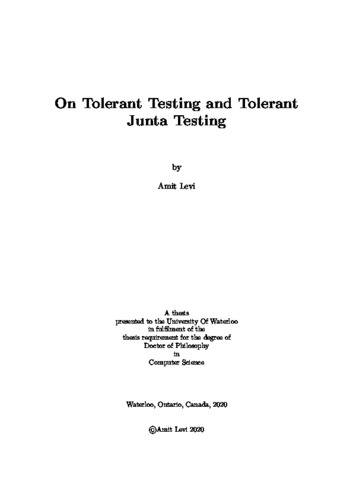 Over the past few decades property testing has became an active field of study in theoretical computer science. The algorithmic task is to determine, given access to an unknown large object (e.g., function, graph, probability distribution), whether it has some fixed property, or it is far from any object having the property. The approximate nature of these algorithms allows in many cases to achieve a significant saving in running time, and obtain \emph{sublinear} running time. Nevertheless, in various settings and applications, accepting only inputs that exactly have a certain property is too restrictive, and it is more beneficial to distinguish between inputs that are close to having the property, and those that are far from it. The framework of \emph{tolerant} testing tackles this exact problem. In this thesis, we will focus on one of the most fundamental properties of Boolean functions: the property of being a \emph{$k$-junta} (i.e., being dependent on at most $k$ variables). The first chapter focuses on algorithms for tolerant junta testing. In particular, we show that there exists a $\poly(k)$ query algorithm distinguishing functions close to $k$-juntas and functions that are far from $2k$-juntas. We also show how to obtain a trade-off between the ``tolerance" of the algorithm and its query complexity. The second chapter focuses on establishing a query lower bound for tolerant junta testing. In particular, we show that any non-adaptive tolerant junta tester, is required to make at least $\Omega(k^2/\polylog k)$ queries. The third chapter considers tolerant testing in a more general context, and asks whether tolerant testing is strictly harder than standard testing. In particular, we show that for any constant $\ell\in \N$, there exists a property $\calP_\ell$ such that $\calP_\ell$ can be tested in $O(1)$ queries, but any tolerant tester for $\calP_\ell$ is required to make at least $\Omega(n/\log^{(\ell)}n)$ queries (where $\log^{(\ell)}$ denote the $\ell$ times iterated log function). The final chapter focuses on applications. We show how to leverage the techniques developed in previous chapters to obtain results on tolerant isomorphism testing, unateness testing, and erasure resilient testing.