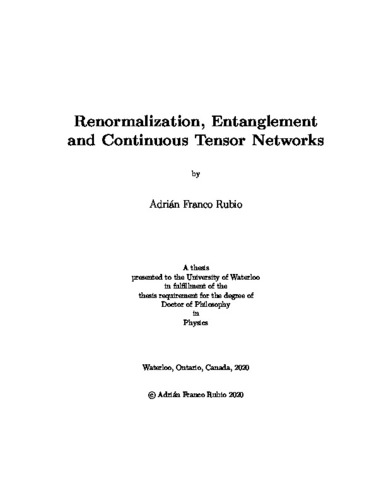 The study of the ground states of local Hamiltonians in quantum many-body and quantum field theoretic systems is a source of many research problems of great complexity. Almost in its entirety, this thesis deals with constructions related to the field of tensor networks, which are efficient parametrizations of mathematical objects from quantum many-body theory (such as quantum states and operators) that exploit our knowledge of their entanglement structures in order to obtain improvements in our computational abilities. In the past decade, the new research program of continuous tensor networks has arisen with the goal of reproducing, in the setting of quantum field theory, the success that tensor network techniques have enjoyed on the lattice. First, we present a number of results from research performed on non-interacting examples of the continuous Multiscale Entanglement Renormalization Ansatz, or cMERA, a continuous tensor network that provides a variational wavefunctional for a quantum field theoretic ground state. Initially, we study the correlations and entanglement structure of cMERA states, providing evidence that such states can be interpreted as UV regularized versions of the physical states they approximate. After that, we study what modifications of the formalism are necessary in order to consider systems with gauge symmetry, or in the presence of boundaries and defects. We obtain prescriptions for the treatment of these cases which, we expect, may also hold in the interacting setting. We then abandon briefly the area of continuous tensor networks to present a piece of research within a different though related research program: that of the study of manifestations of universal emergent behaviour in critical lattice systems. In particular we bring attention to the existence of an approximate representation of the Virasoro algebra supported on the eigenvectors of the reduced density matrices of critical lattice systems. We call this the entanglement algebra, and study its accuracy in the particular case of the Ising model. Lastly, we present a proposal for a continuous version of the Tensor Network Renormalization (TNR) algorithm, which we dub continuous TNR, or cTNR. cTNR operates on UV regularized classical partition functions or quantum Euclidean path integrals, and generates a real-space renormalization group flow via continuous coarse-graining and rescaling operations. We show that a UV regularized version of the free boson path integral can be made a fixed point of such a renormalization flow, in a way that allows for recovery of the conformal data associated to the free boson conformal field theory.