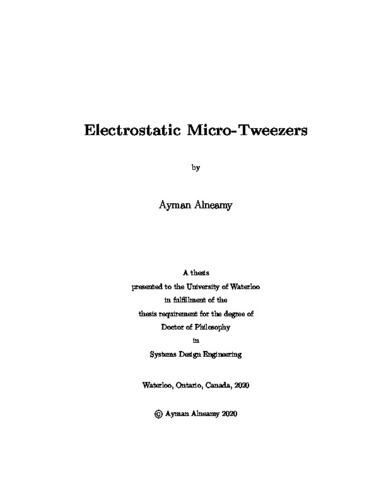 This dissertation presents a novel electrostatic micro-tweezers designed to manipulate particles with diameters in the range of 5-14 μm. The tweezers consist of two grip-arms mounted to an electrostatically actuated initially curved micro-beam. The tweezers offer further control, via electrostatic actuation, to increase the pressure on larger objects and to grasp smaller objects. It can be operated in two modes. The first is a traditional quasi-static mode where DC voltage commands the tweezers along a trajectory to approach, hold and release micro-objects. It exploits nonlinear phenomena in electrostatic curved beams, namely snap-through, snap-back and static pull-in and the bifurcations underlying them. The second mode uses a harmonic voltage signal to release, probe and/or interact with the objects held by the tweezers in order to perform function such as cells lysis and characterization. It exploits additional electrostatic MEMS phenomena including dynamic pull-in as well as the orbits and attractors realized under harmonic excitation. Euler-Bernoulli beam theory is utilized to derive the tweezers governing equation of motion taking into account the arm rotary inertia, the electrostatic fringing field and the nonlinear squeeze-film damping. A reduced-order model (ROM) is developed utilizing two, three and five straight beam mode shapes in a Galerkin expansion. The adequacy of the ROM in representing the tweezers response was investigated by comparing its static and modal response to that of a 2D finite element model (FEM). Simulation results show small differences between the ROM and the FEM static models in the vicinity of snap-through and negligible differences elsewhere. The results also show the ability of the tweezers to manipulate micro-particles and to smoothly compress and hold objects over a voltage range extending from the snap-back voltage (89.01 V) to the pull-in voltage (136.44 V). Characterization of the curved micro-beam show the feasibility of using it as a platform for the tweezers. Evidence of the static snap-through, primary resonance and the superharmonic resonances of orders two and three are observed. The results also show the co-existence of three stable orbits around one stable equilibrium under excitation waveforms with a voltage less than the snap-back voltage. Three branches of orbits are identified as a one branch of small orbits within a narrow potential well and two branches of medium-sized and large orbits within a wider potential well. The transition between those branches results in a characteristic of double-peak frequency-response curve. We also report evidence of a bubble structure along the medium sized branch consisting of a cascade of period-doubling bifurcations and a cascade of reverse period-doubling bifurcations. Experimental evidence of a chaotic attractor developing within this structure is reported. Odd-periodic windows also appear within the attractor including period-three (P-3), period- five (P-5) and period-six (P-6) windows. The chaotic attractor terminates in a cascade of reverse period-doubling bifurcations as it approaches a P-1 orbit.