Enhancing the Simultaneous Alignment and Sorting of Carbon Nanotubes 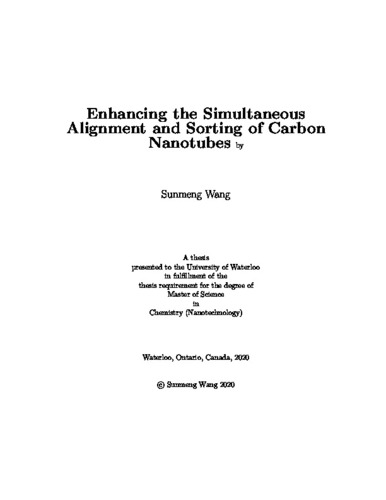 Carbon nanotubes have broken through the barriers of our imagination and are currently being investigated for various nano-electronic device applications. Successful implementation in these applications however, often requires strict control of their properties and orientation. As such, post-synthesis processing must be performed prior to any device fabrication. These processing techniques often aim to either address the challenges associated with sorting and alignment individually. A novel method called the alignment relay technique aims to address both of these issues simultaneously. As the introduction of this process was merely a proof of concept, focus must be put in place to enhance the performance and e cacy. In an attempt to improve this technique, we alter the temperature, liquid crystal, iptycene design as well as means of alignment as attempts to accomplish this. At the same time, mechanistic details are revealed to gain a better insight of the nanoscopic dynamics. Preparation of preliminary materials and apparatuses are initially performed. We rst build a Polarized Optical Microsope (POM) in order to observe the liquid crystal dynamics. Despite its frequent use in a research setting, the cost can be upwards of thousands of dollars. As only qualitative observations are required, we decided to build our own model. In this section, we provide a blueprint for the construction of an economical POM with a heating stage and digital connection for facile recording of data, totaling about $150-$200. We subsequently demonstrate its e ective application in visualizing liquid crystals. After the microscope is made, various molecules are synthesized to gain the chemical resources needed for the alignment. In an attempt to circumvent some of the hazards asssociated with the original synthesis, an alternate route to create iptycene (5) is rst explored. Despite having success in the initial parts of the synthetic sequence, an inability to replicate literature conditions causes the nal step to produce only a 2% yield. Thus, we are forced to abandon this procedure and revert to using the original route to making the molecule. A smaller iptycene molecule (9) is subsequently made through attaching the anchoring group directly to one of the intermediates appearing in the synthesis of iptycene (5). Finally, a separate liquid crystal (11) is synthesized through two nucleophilic additions with 4- hydroxy-4-biphenylcarboxylic acid. These materials provide us the necessary grounding to perform experiments with the alignment relay technique. After the preliminary materials are gathered, the e ects of changing the temperature, liquid crystal and iptycene on CNT depositions are observed. An increase in temperature from 25 oC to 70 oC with a nematic liquid crystal (ZLI-1185) do not yield great results as standard deviations are over 45 o. Attempts at using a more ordered smectic A liquid crystal mixture do not aid results either. In fact, we obtain no CNT deposition at all with these iv attempts. From this, we gather that controlling both the alignment and functionalization of iptycenes at higher temperatures prove to be a challenging task. As a result of the unknown parameters of both functionalization and alignment kinetics, higher temperature experiments are abandoned. Next, iptycene (9) is used to probe the sorting e ects of the alignment relay technique. As the size of the cavity on this molecule is signi cantly smaller in comparison to the original iptycene (5) we expect smaller CNT's to be deposited onto the surface. Unfortunately, alignment of this molecule in liquid crystal media is a potential issue due to the smaller size. Consequently, no CNT's are spotted on the surface. Valuable mechanistic insights are obtained from these changes in variables in the alignment relay technique. Finally, magnetic elds are explored as a viable method for alignment. From these experiments, we nd that the performance is positively associated with the magnetic eld strength. The standard deviation in alignment between a 0.6 T eld and 0.9 T eld are 55 o and 24 o respectively with also a clear Gaussian distribution found in the latter condition. Trends for selectivity however, are uncon rmed as Raman spectroscopy using 532 nm and 633 nm lasers show con icting information. The 532 nm laser show the best selectivity under a 0.9 T eld while the 633 nm laser suggested that the 0.6 T has the better selectivity. Despite needing further data to establish a pattern between eld strength selectivity, general patterns remain congruent with previous reports as the same diameter CNT's (1.44 nm and 1.59 nm) are present on the substrate surface. These positive results allow the use of magnetic elds to be the basis of future alignment experiments and processes. Bene ts as a result of this change include limiting exposure of the substrate to dust, adjustable alignment and reusability.