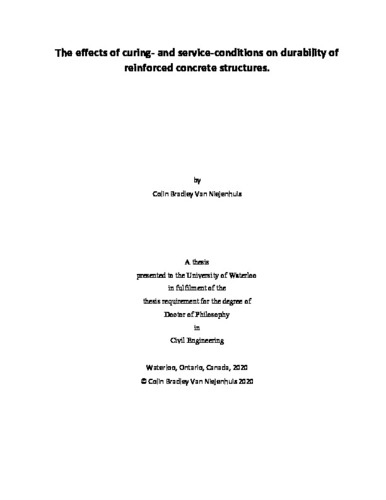 Reinforced structural concrete is a critical building block of our civil infrastructure, especially our roads and bridges. As the transportation network grows, and our current infrastructure continues to age, the social cost of rehabilitation and maintenance must be considered. Recently, the onus has been placed on the designer to consider how new methods and materials can create structures which will last longer in the harsh Canadian climate. Thus, with the goal of improving long term design considerations for reinforced concrete structures, an experimental and analytical research project was undertaken to determine how the environmental conditions in which the concrete is cast as well as subjected to over its useful service life affects the properties of the composite structure. This was divided into to unique components. First, the effect of concrete curing conditions and in-service temperature on the structural properties of reinforced concrete structures, especially those containing glass fibre reinforced polymer (GFRP) reinforcement was investigated. Secondly, the effect of salt use on the structure of concrete and its potential effect on reinforcing steel was examined. To explore the impact of curing and service conditions, four experimental programs were conducted. Two of these programs investigated the effect of thermal fatigue on GFRP reinforced structures in both a lab and field setting. The laboratory tests varied the temperature of concrete prisms containing GFRP between 20°C and -20°C for over 300 freeze-thaw cycles. Over the duration of the test, the dynamic modulus was monitored to assess for any internal microcracking. For the field program, concrete prisms reinforced with GFRP were placed outdoors and exposed to the Ontario climate for approximately four years. The internal strains were recorded and compared to those without GFRP. From both of these procedures it was concluded that the differential coefficient of thermal expansion between GFRP and concrete posed no direct risk to the concrete surrounding the GFRP due to cyclic effects alone. The third program evaluated the impact of curing- and testing-temperatures on the bond between the GFRP and concrete. This was investigated by casting GFRP from two different suppliers, and in two different bar sizes, into concrete cured at 60°C, 70°C, 80°C and ambient lab conditions. After 28-days, the bond strength of the specimens was tested, at either ambient lab conditions or -30°C, and the variance compared. Contrary to the hypothesis, the bond increased at -30°C, which was directly correlated to the increase in compressive strength that the frozen specimens experienced. The fourth program examined why frozen concrete experienced strength increases of up to 46% compared to identical concrete tested at ambient conditions. This was correlated to the amount of pore water which, when frozen, provides crushing resistance to the concrete. The results of these experiments, alongside code and literature analysis, have suggested that the code development length of GFRP in high strength concrete is currently highly conservative. In order to examine the effects of salt use on the structure of concrete, two experimental programs were conducted. First, a 5-year study was conducted to compare the compressive strength of concrete submerged in: MgCl2, CaCl2, NaCl, or a multi-chloride brine and compared to specimens placed in a humidity chamber. The results indicated compressive strength reductions of up 25% in concretes exposed to MgCl2 or CaCl2, caused by chemical reactions between the chloride and the cement paste. Statistical analysis of the reduction indicated that these chemical reactions lead to changes in failure mechanisms between what the designer assumed and the structure experiences. The second program was designed to understand the influence of supplementary cementitious materials (SCM’s) and the water to binder ratio on the pore solution composition of cement pastes. Sodium chloride was admixed into cement pastes containing ordinary Portland cement as well as ground granulated blast furnace slag, fly ash, and silica fume with water to binder ratios ranging between 0.40 and 0.55. The pore solution of the cured cement paste was then extracted and chemically analyzed using ion chromatography (IC) for the anions and inductively coupled plasma (ICP) for the cations. The results indicate that the concentration of chloride in the pore solution rises with increasing amounts of admixed chloride in the cement paste. Unexpectedly, the increase in admixed chloride also led to an increase in the sulphates in the pore solution, leading to higher chloride concentrations required to initiate corrosion.