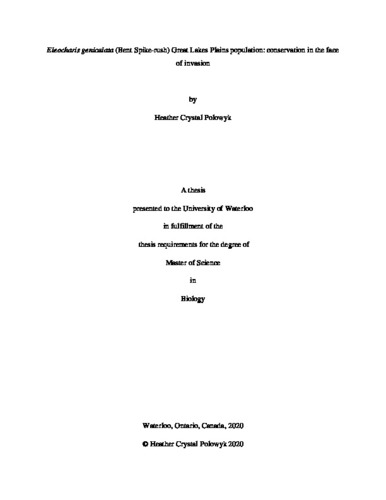 Eleocharis geniculata is listed as endangered under the Canadian Species at Risk Act, S.C. 2002 and the Ontario Endangered Species Act, S.O. 2007. Despite these listings, the current Ontario government recovery strategy lists the location and population dynamics, habitat requirements and the characterization of threats as knowledge gaps preventing the recovery of the species (Bowles 2010). Comprehensive surveys of E. geniculata in the three known critical habitat locations for the Great Lakes Plains population (Cedar Springs, Rondeau Provincial Park, and Long Point National Wildlife Area) have not occurred since 2007. Prior to my thesis work, it was unknown if E. geniculata still existed in Ontario. While some information was known about E. geniculata habitat requirements, such as its low tolerance for competing vegetation (Bowles 2010), our understanding of E. geniculata’s habitat needs was largely qualitative. Further, invasive Phragmites australis is currently recognized as the main threat to E. geniculata, but this also had not been quantified (Bowles 2010). My objectives were to: 1) search critical habitat to locate and census any extant E. geniculata patches; 2) characterize the habitat requirements of E. geniculata by quantifying biotic and abiotic site characteristics at extant and recently occupied locations and; 3) characterize the threat and map the presence of invasive P. australis adjacent to any E. geniculata patches to evaluate the risk that this invasion poses to remaining E. geniculata. I conclude that E. geniculata still exists in Ontario, but most likely only in the Long Point National Wildlife Area, where it is threatened by invasive P. australis, which has spread unchecked for decades. In Long Point National Wildlife Area, I located one patch of E. geniculata in 2017 and two patches in 2018, both of which had invasive P. australis growing in or adjacent to them. My research confirmed the anecdotal information about habitat requirements, including that E. geniculata cannot tolerate competition for light or persistent inundation with standing water > 1 cm in depth. Eleocharis geniculata occurred only on bare sandy substrate with low organic content and nutrient levels and relatively high calcium. Critically, my results confirm that invasive P. australis is a major threat to E. geniculata with its ability to outcompete E. geniculata, and its tendency to grow in monoculture stands in the preferred habitat of E. geniculata. Phragmites australis intercepts between 58 and 98% of incoming photosynthetically active radiation, leaving too little for E. geniculata to assimilate carbon via photosynthesis.