Development of sports-specific classification for Paralympic skiers with visual impairment 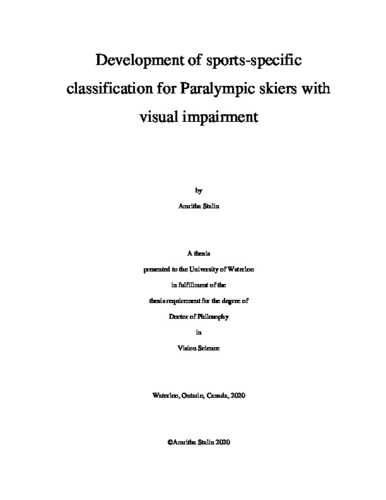 Introduction: The Paralympic Games are not only a platform for athletes with disabilities to achieve their dreams, but the Games also play a major role in changing societal attitudes towards people with disabilities and accelerating the progress towards achieving a goal of equality for all. Classification plays a significant role in making Paralympic competitions fair for all athletes. The overall purpose of the studies described in this thesis was to design evidence-based classification systems for the visually impaired category of Para nordic and Para alpine skiing. The specific objectives of the thesis were four-fold. The first and second objectives were to determine a minimum disability criterion that determines eligibility for competition and to develop additional criteria that group athletes with similar impairments into competition classes, respectively, in both Para nordic and Para alpine skiing. The third objective was to investigate the effect of the use of blindfolds on the skiing performance of Para skiers in the most severe visual impairment class, as the Paralympics rules currently mandate the use of blindfold by those skiers in Para nordic and Para alpine skiing. The final objective was to assess the validity of visual field measurements conducted with the Arc perimeter, which was the perimeter used in all the previously mentioned studies. Experiment I: Eight visual acuity and contrast sensitivity impairments and six peripheral visual field impairments were simulated in able-sighted skiers who participated in the study. The visual acuity, contrast sensitivity, and visual fields of each participant were assessed with and without the simulated impairments. The participants raced through specially designed short nordic or alpine racecourses with and without the simulated impairments and the changes in the race times with and without the simulated impairments were analyzed to identify the minimum levels of vision impairment that significantly affected skiing performance. These studies suggested that moderate reductions in visual acuity, contrast sensitivity, and visual field appear to have significant detrimental effects on nordic and alpine skiing performance. Experiment II and III: A wide range of visual functions such as static and dynamic visual acuities, light sensitivity, glare sensitivity, glare recovery, contrast sensitivity, translational and radial motion perception, and visual field was assessed binocularly in elite Para nordic and Para alpine skiers who participated in the studies. The relationships between skiing performances, which were calculated using modified Para nordic and Para alpine skiing points systems based on participants’ raw times, and the levels of visual functions assessed were analysed 1) to identify the visual functions associated with skiing performance (Experiment II) and 2) to develop sports class allocation criteria (Experiment III). It was concluded that VA and VF are the only visual functions that need to be included in the classification. It was also concluded that Para nordic and Para alpine skiers with light perception or no light perception vision performed significantly worse compared to the skiers with measurable vision and thus should be allocated to a different class than participants with measurable visual acuity. Experiment IV: Participants, who were elite Para nordic and Para alpine skiers, were asked to ski specially designed short nordic or alpine courses with and without their blindfolds in randomized orders. Time taken to complete the courses were compared between the two blindfold conditions to assess the effect of the blindfold on skiing performances. Results from these studies suggested that the blindfolds do not significantly affect performances in Para nordic and Para alpine skiers who are eligible to compete in the B1 class and that blindfolds need not be mandatory in both the sports. Experiment V: Visual acuity and visual fields were assessed binocularly in adult participants with monocular or binocular visual field defects. The functional visual field scores obtained using an Arc perimeter were compared with the functional visual field scores obtained using a Humphrey Field Analyzer, and the agreement between both methods was assessed using Bland-Altman plots to assess the validity of the visual field measurements obtained using Arc perimeter. This final study concluded that the functional scores obtained using an Arc perimeter could be used as an efficient and feasible way to assess visual fields for classification research purposes. Conclusion: The results from these studies provide evidence to support the development of sport-specific classification systems for the vision impairment category in both Para nordic and Para alpine skiing. The decision to change, or not change, the Para nordic and Para alpine skiing classification regulations for athletes with vision impairments remains at the sole discretion of the International Paralympic Committee.