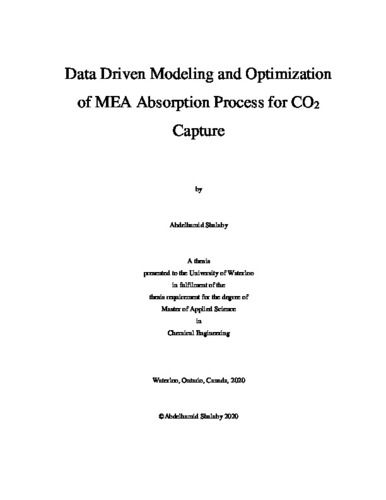 Global warming is a rising issue and there are many research studies aiming to reduce greenhouse gas emissions. Carbon capture and storage technologies improved throughout the years to contribute as a solution to this problem. In this work the post-combustion carbon capture unit is used to develop surrogated models for operation optimization. Previous work included mechanistic and detailed modeling of steady-state and dynamic systems. Furthermore, control structures and optimization approaches have been studied. Moreover, various solutions such as MEA, DEA, and MDEA have been tested and simulated to determine the efficiency and the behavior of the system. In this work a dynamic model with MEA solution developed by (Nittaya, 2014) and (Harun, 2012) is used to generate operational data. The system is simulated using gProms v.5.1 with six PI controllers. The model illustrated that the regeneration of the solvent is the most energy-consuming part of the process. Due to the changes in electricity supply and demand, also, the importance of achieving a specific %CC and purity of carbon dioxide as outputs of this process, surrogated models are developed and used to predict the outputs and to optimize the operating conditions of the process. Multiple machine learning and data-driven models has been developed using simulation data generated after a proper choice of the operating variables and the important outputs. Steady-state and transient state models have been developed and evaluated. The models were used to predict the outputs of the process and used later to optimize the operating conditions of the process. The flue gas flow rate, temperature, pressure, reboiler pressure, reboiler, and condenser duties were selected as the operating variables of the system (inputs). The system energy requirements, %CC, and the purity of carbon dioxide were selected to be the outputs of the process. For steady-state modeling, artificial neural network (ANN) model with backpropagation and momentum was developed to predict the process outputs. The ANN model efficiency was compared to other machine learning models such as Gaussian Process Regression (GPR), rational quadratic GPR, squared exponential GPR, tree regression and matern GPR. The ANN excelled all other models in terms of prediction and accuracy, however, the other model’s regression coefficient (R2) was never below 0.95. For dynamic modelling, recurrent neural networks (RNN) have been used to predict the outputs of the system. Two training algorithms have been used to create the neural network: Levenberg-Marquardt (LM) and Broyden-Fletcher-Goldfrab-Shanno (BFGS). The RNN was able to predict the outputs of the system accurately. Sequential quadratic programming (SQP) and genetic algorithm (GA) were used to optimize the surrogated models and determine the optimum operating conditions following an objective of maximizing the purity of CO2 and %CC and minimizing the system energy requirements.