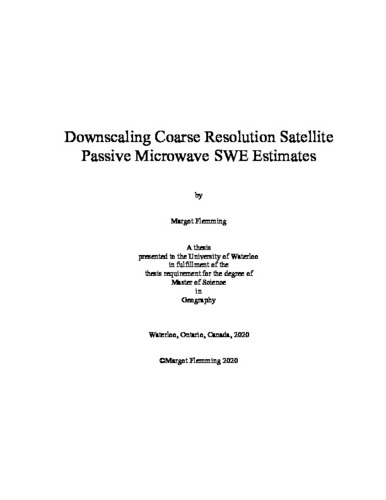 The spatio-temporal heterogeneity of seasonal snow and its impact on socio-economic and environmental functionality make accurate, real-time estimates of snow water equivalent (SWE) important for hydrological and climatological predictions. Passive microwave remote sensing offers a cost effective, temporally and spatially consistent approach to SWE monitoring at the global to regional scale. However, local scale estimates are subject to large errors given the coarse spatial resolution of passive microwave observations (25 x 25 km). Regression downscaling techniques can be implemented to increase the spatial resolution of gridded datasets with the use of related auxiliary datasets at a finer spatial resolution. These techniques have been successfully implemented to remote sensing datasets such as soil moisture estimates, however, limited work has applied such techniques to snow-related datasets. This thesis focuses on assessing the feasibility of using regression downscaling to increase the spatial resolution of the European Space Agency’s (ESA) Globsnow SWE product in the Red River basin, an agriculturally important region of the northern United States that is widely recognized as a suitable location for passive microwave remote sensing research. Multiple Linear (MLR), Random Forest (RFR) and Geographically Weighted (GWR) regression downscaling techniques were assessed in a closed loop experiment using Snow Data Assimilation System (SNODAS) SWE estimates at a 1 x 1 km spatial resolution. SNODAS SWE data for a 5-year period between 2013-2018 was aggregated to a 25 x 25 km spatial resolution to match Globsnow. The three regression techniques were applied using correlative datasets to downscale the aggregated SNODAS data back to the original 1 x 1 km spatial resolution. By comparing the downscaled SNODAS estimates to the original SNODAS data, it was found that RFR downscaling produced much less variation in downscaled results, and lower RMSE values throughout the study period when compared to MLR and GWR downscaling techniques, indicating it was the optimal downscaling method. RFR downscaling was then implemented on daily Globsnow SWE estimates for the same time period. The downscaled SWE results were evaluated using SNODAS SWE as well as in situ derived SWE estimates from weather stations within the study region. Spatial and temporal errors were assessed using both the SNODAS and in situ reference datasets and overall RMSEs of 21 mm and 37 mm were found, respectively. It was observed that the southern regions of the basin and seasons with higher downscaled SWE estimates were associated with higher errors with overestimation being the most common bias throughout the region. A major contribution of this study is the illustration that RFR downscaling of Globsnow SWE estimates is a feasible approach to understanding the seasonal dynamics of SWE in the Red River basin. This is extremely beneficial for local communities within the basin for flood management and mitigation and water resource management.