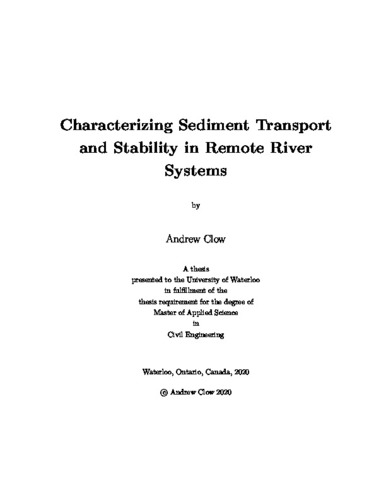 Canada is a large country with vast networks of linear infrastructure, such as roads and pipelines, that unavoidably intersect with waterways. Engineers must be able to characterize geomorphologic processes and channel stability for the design of infrastructure at water crossings. This process is not always straightforward. Water crossings frequently occur in remote locations which makes access for collecting field data difficult and poses an increased health and safety risk to field staff. Stream stability is closely linked to sediment transport and both remain difficult to parameterize due to extreme sensitivities to estimates of discharge, thresholds of motion, inter-particle dynamics, and flood history. The uncertainty around precipitation and flows has been heightened with the onset of climate change as events that used to be considered "extreme" are becoming more commonplace. A field program and modelling framework (Alluvial Stability Indexing Model (ASIM)) were developed to be used alongside existing spatial and hydrological modelling software to expand the capabilities of SNC-Lavalin Inc. to provide additional information to decision-makers for the design of linear infrastructure at crossings with alluvial systems. ASIM allows for sediment transport to be assessed in relatively remote, and hence poorly parameterized channels, over different time scales and climate scenarios. Sediment transport is linked to channel stability and relative stability can be characterized within a river network at the reach scale. The field program supports ASIM by incorporating less time-intensive measurements of surficial sediment characteristics and channel geometry using advancements in unmanned aerial vehicle (UAV) technology and photogrammetry software. Chauncey Creek was used as the river catchment to test the field program and it was confirmed that grain size distribution (GSD) and geometry data can be collected quickly in places with limited access or elevated health and safety risks. Data from a UAV was shown to be within an accuracy of 1 - 5% without georeferenced control markers and three passes of survey locations were sufficient to collect high-resolution photos and data 3-D models. The comparisons between Wolman pebble counts, paint-and-pick measurements, and photosieving showed that photos from UAVs can be analyzed with BASEGRAIN to acquire GSDs within 8%. The channel properties in Chauncey Creek appear to follow reasonable relationships relative to a stream power index and simplifications were made for modelling purposes. ASIM was shown to perform similarly to a model developed by G. Parker (2004) and total continuity of mass was maintained. A scenario that matched conditions measured in the field for Chauncey Creek showed that the slope, elevation, and dominant grain size in the steepest sections would change to the greatest degree. Different flow scenarios suggest that the model approaches a common future, but the extent and speed of the changes depend on the magnitude and recurrence of floods. Different geometrical scenarios show that widening a channel could have more noticeable impacts downstream than narrowing a channel, but this conclusion will likely depend on sediment loading and channel geometry in neighbouring reaches.