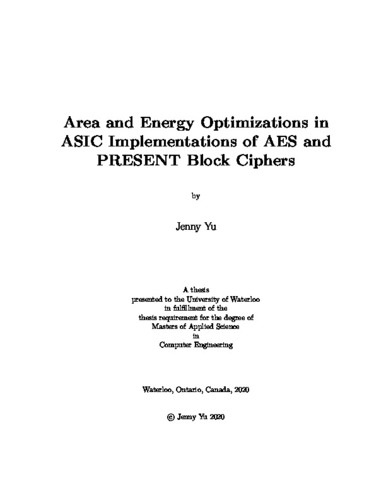 When small, modern-day devices surface with neoteric features and promise benefits like streamlined business processes, cashierless stores, and autonomous driving, they are all too often accompanied by security risks due to a weak or absent security component. In particular, the lack of data privacy protection is a common concern that can be remedied by implementing encryption. This ensures that data remains undisclosed to unauthorized parties. While having a cryptographic module is often a goal, it is sometimes forfeited because a device's resources do not allow for the conventional cryptographic solutions. Thus, smaller, lower-energy security modules are in demand. Implementing a cipher in hardware as an application-specific integrated circuit (ASIC) will usually achieve better efficiency than alternatives like FPGAs or software, and can help towards goals such as extended battery life and smaller area footprint. The Advanced Encryption Standard (AES) is a block cipher established by the National Institute of Standards and Technology (NIST) in 2001. It has since become the most widely adopted block cipher and is applied in a variety of applications ranging from smartphones to passive RFID tags to high performance microprocessors. PRESENT, published in 2007, is a smaller lightweight block cipher designed for low-power applications. In this study, low-area and low-energy optimizations in ASICs are addressed for AES and PRESENT. In the low-area work, three existing AES encryption cores are implemented, analyzed, and benchmarked using a common fabrication technology (STM 65 nm). The analysis includes an examination of various implementations of internal AES operations and their suitability for different architectural choices. Using our taxonomy of design choices, we designed Quark-AES, a novel 8-bit AES architecture. At 1960 GE, it features a 13% improvement in area and 9% improvement in throughput/area² over the prior smallest design. To illustrate the extent of the variations due to the use of different ASIC libraries, Quark-AES and the three analyzed designs are also synthesized using three additional technologies. Even for the same transistor size, different ASIC libraries produce significantly different area results. To accommodate a variety of applications that seek different levels of tradeoffs in area and throughput, we extend all four designs to 16-bit and 32-bit datawidths. In the low-energy work, round unrolling and glitch filtering are applied together to achieve energy savings. Round unrolling, which applies multiple block cipher rounds in a combinational path, reduces the energy due to registers but increases the glitching energy. Glitch filtering complements round unrolling by reducing the amount of glitches and their associated energy consumption. For unrolled designs of PRESENT and AES, two glitch filtering schemes are assessed. One method uses AND-gates in between combinational rounds while the other used latches. Both methods work by allowing the propagation of signals only after they have stabilized. The experiments assess how energy consumption changes with respect to the degree of unrolling, the glitch filtering scheme, the degree of pipelining, the spacing between glitch filters, and the location of glitch filters when only a limited number of them can be applied due to area constraints. While in PRESENT, the optimal configuration depends on all the variables, in a larger cipher such as AES, the latch-based method consistently offers the most energy savings.