On the Non-Orthogonal Layered Broadcast Codes in Cooperative Wireless Networks 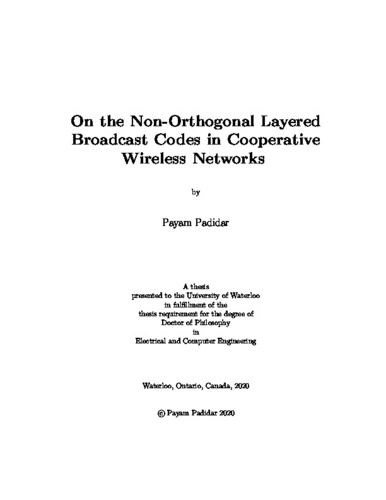 A multi-fold increase in spectral eﬃciency and throughput are envisioned in the ﬁfth generation of cellular networks to meet the requirements of International Telecommunication Union (ITU) IMT-2020 on massive connectivity and tremendous data traﬃc. This is achieved by evolution in three aspects of current networks. The ﬁrst aspect is shrinking the cell sizes and deploying dense picocells and femtocells to boost the spectral reuse. The second is to allocate more spectrum resources including millimeter-wave bands. The third is deploying highly eﬃcient communications and multiple access techniques. Non-orthogonal multiple access (NOMA) is a promising communication technique that complements the current commercial spectrum access approach to boost the spectral eﬃciency, where different data streams/users’ data share the same time, frequency and code resource blocks (sub-bands) via superimposition with each other. The receivers decode their own messages by deploying the successive interference cancellation (SIC) decoding rule. It is known that the NOMA coding is superior to conventional orthogonal multiple access (OMA) coding, where the resources are split among the users in either time or frequency domain. The NOMA based coding has been incorporated into other coding techniques including multi-input multi-output (MIMO), orthogonal frequency division multiplexing (OFDM), cognitive radio and cooperative techniques. In cooperative NOMA codes, either dedicated relay stations or stronger users with better channel conditions, act as relay to leverage the spatial diversity and to boost the performance of the other users. The advantage of spatial diversity gain in relay-based NOMA codes, is deployed to extend the coverage area of the network, to mitigate the fading eﬀect of multipath channel and to increase the system throughput, hence improving the system eﬃciency. In this dissertation we consider the multimedia content delivery and machine type communications over 5G networks, where scalable content and low complexity encoders is of interest. We propose cross-layer design for transmission of successive reﬁnement (SR) source code interplayed with non-orthogonal layered broadcast code for deployment in several cooperative network architectures. Firstly, we consider a multi-relay coding scheme where a source node is assisted by a half-duplex multi-relay non-orthogonal amplify-forward (NAF) network to communicate with a destination node. Assuming the channel state information (CSI) is not available at the source node, the achievable layered diversity multiplexing tradeoﬀ (DMT) curve is derived. Then, by taking distortion exponent (DE) as the ﬁgure of merit, several achievable lower bounds are proved, and the optimal expected distortion performance under high signal to noise ratio (SNR) approximation is explicitly obtained. It is shown that the proposed coding can achieve the multi-input single-output (MISO) upper bound under certain regions of bandwidth ratios, by which the optimal performance in these regions can be explicitly characterized. Further the non-orthogonal layered coding scheme is extended to a multi-hop MIMO decode-forward (DF) relay network where a set of DE lower bounds is derived. Secondly, we propose a layered cooperative multi-user scheme based on non-orthogonal amplify-forward (NAF) relaying and non-orthogonal multiple access (NOMA) codes, aiming to achieve multi-user uplink transmissions with low complexity and low signaling overhead, particularly applicable to the machine type communications (MTC) and internet of things (IoT) systems. By assuming no CSI available at the transmitting nodes, the proposed layered codes make the transmission rate of each user adaptive to the channel realization. We derive the close-form analytical results on outage probability and the DMT curve of the proposed layered NAF codes in the asymptotic regime of high SNR, and optimize the end-to-end performance in terms of the exponential decay rate of expected distortion. Thirdly, we consider a single relay network and study the non-orthogonal layered scheme in the general SNR regime. A layered relaying scheme based on compress-forward (CF) is introduced, where optimization of end to end performance in terms of expected distortion is conducted to jointly determine network parameters. We further derive the explicit analytical optimal solution with two layers in the absence of channel knowledge. Finally, we consider the problem of multicast of multi-resolution layered messages over downlink of a cellular system with the assumption of CSI is not available at the base station (BS). Without loss generality, spatially random users are divided into two groups, where the near group users with better channel conditions decode for both layers, while the users in the second group decode for base layer only. Once the BS launches a multicast message, the ﬁrst group users who successfully decoded the message, deploy a distributed cooperating scheme to assist the transmission to the other users. The cooperative scheme is naive but we will prove it can eﬀectively enhance the network capacity. Closed form outage probability is explicitly derived for the two groups of users. Further it is shown that diversity order equal to the number of users in the near group is achievable, hence the coding gain of the proposed distributed scheme fully compensate the lack of CSI at the BS in terms of diversity order.