The Unbounded School: Education Beyond the Walls 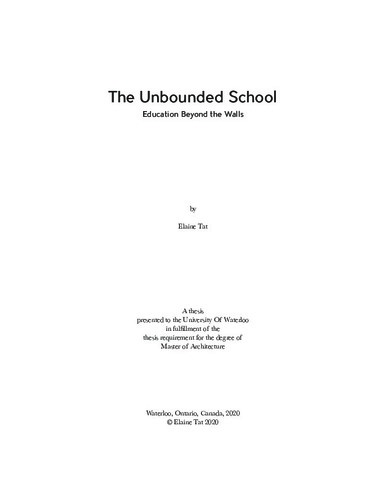 Public education has long been a tool for state authorities to establish and indoctrinate societal moral and civic standards, a stance that has shifted in modern society. In Canada, provincial public education systems have undergone a series of reforms in the last quarter century in response to a competitive globalized world where data driven results, efficiency and performance are the central concerns. Education has become a tool to indoctrinate standards rather than a tool to liberate the mind. Evidence of standardization by ways of institutionalized schooling is visible in the architecture of schools. The resulting layers of material boundaries as wells as layers of bureaucratic protocols dissociate the school from society. This thesis seeks to challenge the intellectual and physical boundaries surrounding the architecture of education and asks: to whom does the school belong? And whom does the school serve? Through Hannah Arendt’s critical essay on modern education for mass society and Paul Goodman’s social criticism on the organized system and its effect on the youth of his generation, this thesis attempts to redefine the process of education as an emancipatory, life-long process for its students as well as a civic and collective responsibility for society. For education to become a means of emancipation, a school must become a material supporter to its students and teachers in their pursuit of spatial agency over their learning environments. The architectural exploration aims to reframe the design proposal for an urban high school in Toronto as an educational network that uses the city’s existing infrastructure as an extension of the school. George Baird’s architectural conditions of publicness provide the theoretical framework to unpack the implications of publicness in the role of education. The Unbounded School begins with a radical reconception of spatial boundaries that entangle the school with the city and education with the community. Ultimately, the school returns to the students and to the city, and the essence of education returns to its public and emancipatory mandate.