Simulation of the Ferrofluid Interface 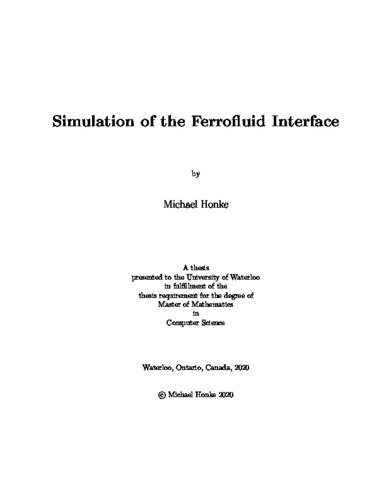 Ferrofluids were initially invented as an additive for rocket fuels. The commercial applications of ferrofluids have since expanded, and have become popularized as desktop toys as well as an art form. Since 1987, ferrofluid simulations have been developed for engineering and physics applications. The Rosensweig instability, a visually appealing behaviour of ferrofluids, has been one of the focuses for ferrofluid simulation. While some simulations were successful, they have either placed restrictive assumptions on the problem, used non-physical models, or failed to reproduce this phenomenon due to high computational expense. One recent exception was a concurrent work from 2019 by Huang et al. that used a particle based fluid simulation method. They successfully reproduced this phenomenon without these issues, but adopted a different computational approach. We present a methodology for simulating ferrofluid with its accompanying Rosensweig instability using finite difference schemes within a grid based simulation. This is the first simulator to use a grid based methodology to approximately reproduce the Rosensweig instability. After Huang et al., our simulator is the second to approximately reproduce the Rosensweig instability with a nonrestrictive physically faithful model. The simulator accommodates any magnetic field and initial configuration of the fluid. Due to the high level of interface detail required by the Rosensweig instability we developed improved curvature estimation and surface tracking methods. We use a normal-aligned height function curvature stencil paired with a modified version of the particle level set. Instead of using particles for error detection, they are directly seeded on the interface to track it. These particles can then be used directly to determine the interface location for curvature estimation. The new particle level set is also able run on a GPU for a twenty to thirty times performance improvement compared to its CPU counterpart. This coupling of methods produces curvature estimates that are two to five times more accurate than when operating independently of each other. After verifying the curvature and surface tracking methods, the ferrofluid simulator is demonstrated by inducing motion into a ferrofluid droplet using an applied magnetic field. Lastly, the Rosensweig instability is produced for a pool of ferrofluid sitting in a dish above a dipole magnet.