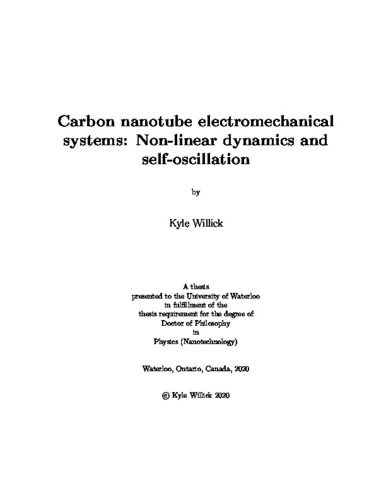 This thesis is motivated by the many sensing applications of carbon nanotube (CNT) nano-electromechanical systems (NEMS), both previous state-of-the-art demonstrations and proposed new uses. This research is particularly focused on the long term goal of realizing the magnetic force sensing of molecular nanomagnets, proposed in reference [1]. The fabrication of micron long, small diameter, high quality suspended carbon nanotubes is a challenging task. Integrating ferromagnetic structures which are incompatible with the CNT growth procedures increases this challenge. In this thesis, devices suitable for magnetic force sensing experiments are realized by separating the chemical vapour deposition growth of CNTs from the device contacts and gates, while maintaining CNT quality. Using conventional readout techniques, the low-temperature measurement of the CNT NEMS mechanical state is usually limited by the CNT contact resistance and capacitance of the measurement cabling/circuit. I describe the use of a heterojunction bipolar transistor (HBT) amplifying circuit operating at cryogenic temperatures near the device to measure the mechanical amplitude at microsecond timescales. A Coulomb rectification scheme, in which the probe signal is at much lower frequency than the mechanical drive signal, allows investigation of the transient response with strongly non-linear driving. The transient dynamics in both the linear and non-linear regimes are measured and modeled by including Duffing and non-linear damping terms in a harmonic oscillator equation. The non-linear regime can result in faster sensing response times, on the order of 10 μs for the device and circuit presented. Self-driven oscillations in suspended carbon nanotubes can create apparent instabilities in the electrical conductance of the CNT. In literature, such instabilities have been observed in kondo regime or high bias transport. In this thesis, I observed self-driven oscillations which created significant conduction within the nominally Coulomb-blockaded low-bias transport. Using a master equation system model, these oscillations are shown to be the result of strongly energy dependent electron tunneling to the contacts of high quality CNT NEMS operated at sub-Kelvin temperatures. Finally, in a separate research project, I consider the noise characterization of spin qubits interacting with the environment. In particular, I address the problem of probing the spectral density S(ω) of semi-classical phase noise using a spin interacting with a continuous-wave (CW) resonant excitation field. Previous CW noise spectroscopy protocols have been based on the generalized Bloch equations (GBE) or the filter function formalism, and assumed weak coupling to a Markovian bath. However, those protocols can substantially underestimate S(ω) at low frequencies when the CW pulse amplitude becomes comparable to S(ω). I derive the coherence decay more generally by extending to higher orders in the noise strength and discarding the Markov approximation. Numerical simulations show that this provides a more accurate description of the spin dynamics compared to a simple exponential decay, especially on short timescales. Exploiting these results, a new protocol is developed that uses an experiment at a single CW pulse amplitude to extend the spectral range over which S(ω) can be reliably determined, down to ω=0.