What We Do in the Shadows: Illuminating the Female Pederastic Tradition 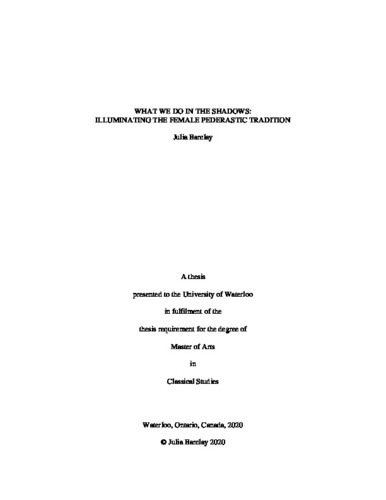 In scholarship, the study of male pederastic practices in the ancient Greek world has been used time and time again to reinforce the existence of homosexuality across time, though the same attention has not been given to a feminine equivalent, let alone for the same intentions. This is an extension of the tradition set by antique writers that chose to address male relationships and same-sex love as the ideal, making treatments on the female type much more difficult to perform. This pattern surfaces in discussions of pederastic homosexuality the world over, leaving modern scholars with only scant conclusions on the possibility of a feminine equivalent without any further efforts to elaborate. The following study aims to address this glaring hole in scholarship. First, in looking to the initiatory origins of male pederasty in the Greek world in order to build and account for the feminine; Second, in establishing the feminine’s own origins in mythology and initiatory practices; And, finally, in identifying how it was practiced throughout the ancient Greek world in surviving poetry from the Archaic and Hellenistic periods.