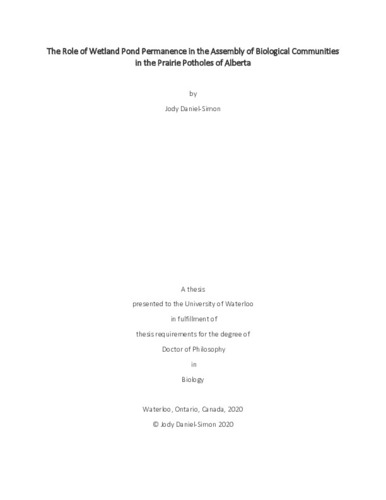 Wetlands in the Prairie Pothole Region (PPR) support numerous biological communities, and the composition of these communities depends on the length of time ponded water is present (i.e., hydroperiod or permanence class). There is consensus in the literature that land cover/land use and climate dictate ponded water amounts in prairie pothole wetlands. While terrain is understood to be an important factor in determining a wetland’s hydroperiod, this metric is seldom included in models forecasting the impact of climate and land cover/land use on hydroperiod. To understand how the habitat of these wetland biota will change under a warmer climate, we must study the relative importance of each hydroperiod driver (i.e., climate, land cover/land use and terrain). Also, to best predict how the structure of these wetland biota will be affected by habitat changes, we must study the role hydroperiod plays in their community assembly. My thesis is centered on two major themes: 1) what is the relative importance of climate, land cover/land use and terrain on wetland permanence class and 2) what is the role of hydroperiod in the assembly of three wetland biota: birds, aquatic macroinvertebrates and plants? First, I investigate the relative importance of the major factors influencing wetland permanence – climate, land cover/land use and terrain. Using 19 metrics representing climate, land use/land cover and terrain, each of which literature suggests could explain permanence, I predicted wetland permanence class in the Boreal, Parkland and Grassland Natural Regions. Climate was most important in predicting wetland permanence class in all three Natural Regions. However, in the Boreal and Parkland, terrain was the second most important driver of permanence class. Based on my findings, I believe that while it is important to consider climate and land cover/land use in forecasting the impact of climate change in PPR models, terrain metrics can provide additional insight into how PPR wetlands will be affected by climate change. Second, I determined whether short- and long-hydroperiod wetlands differed in the relative influence of biological and environmental filtering on community abundances. My findings suggest that: 1) biological interactions had an equivalent role in shaping community abundances across the hydroperiod gradient and 2) hydroperiod alone could not explain community abundances because cross-taxon relationships were stronger (77% ±SE 12%) than taxon-hydroperiod relationships. Third, I determined whether hydroperiod had a more important role in the functional dispersion (i.e., how species abundances vary in trait space) of wetland biota. I conclude that: 1) there is a direct influence of hydroperiod on functional dispersion of all taxa; 2) both bird and aquatic macroinvertebrate functional dispersion is causally related to the functional dispersion of plants; and 3) hydroperiod had a more important role in structuring functional dispersion than cross-taxon interactions. Fourth, I sought to understand how sensitive wetland biota would be to an inter-year change in hydroperiod that was driven by a change in precipitation timing, which occurred between the two years my wetlands were surveyed. I found that for birds and aquatic macroinvertebrates, there was a change in community composition between years, which I could attribute to a change in hydroperiod. For birds and aquatic macroinvertebrates, I found that this change in hydroperiod resulted in wetlands supporting taxa that were weakly associated with wetland permanence or those being able to reproduce/survive these drier conditions. I posit that if the delay in precipitation became a sustained climatic pattern, we would eventually see changes in the community structure of plants similar to the changes we observed among birds and aquatic macroinvertebrates after a single year of delayed precipitation.

Jody Daniel-Simon (2020). The Role of Wetland Pond Permanence in the Assembly of Biological Communities in the Prairie Potholes of Alberta. UWSpace. http://hdl.handle.net/10012/15824