Town, Gown and Capital: The Student Housing Submarket and the Production of Urban Space 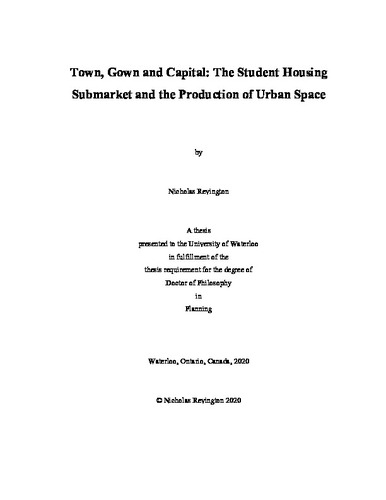 Student housing has emerged as a mainstream global asset class, while the concentration of students in particular neighbourhoods through a process of “studentification” has increasingly been recognized as an important phenomenon in a variety of international contexts. Yet student housing is often associated with vexing planning problems associated with noise disturbances, behavioural issues, and poor property upkeep. Therefore, attention to how the student housing submarket is formed and operates is essential. This dissertation draws primarily on a case study of the City of Waterloo to investigate the role of a variety of actors including developers, investors, landlords and property managers, planners, institutions, students, and others in creating and shaping the student housing submarket. In doing so, it interrogates how and why student housing has become a favourable investment, the role of the life course therein, and the implications for planning practice. Waterloo is an especially salient case, as it is home to nearly half of Canada’s private purpose-built student accommodations and is an exemplar of the so-called “knowledge economy city.” The analysis combines political-economic and intergenerational approaches. Data are drawn from document analyses of planning reports and real estate industry filings, reports, grey literature, and related materials as well as semi-structured interviews with 44 key informants from the planning and real estate sectors, universities, and student and neighbourhood organizations, and 27 students. The findings are described in four empirical article-based chapters. The first article demonstrates how planning in Waterloo has not merely responded to changes in the student housing submarket, but since the 1980s has actively anticipated change and as a result has shaped subsequent trajectories of studentification. The second article examines where and why the student housing sector in Canada has garnered the attention of large-scale finance-backed investors, and the strategies these players use in their attempts to extract value from the sector. It also considers the implications of this process for students and cities as it has played out in Waterloo. It concludes that the development of student housing in Canada has been largely driven by the search for new avenues for profitable investment, and therefore studentification can be interpreted as a spatial and sectoral fix within capitalist urbanization. The third article investigates the role of planning, real estate strategies, and neighbourhood politics in shaping studentification at the local scale by producing “generationed” spaces based on a distinct student life course stage. It finds that creating a student neighbourhood in this way facilitates the extraction of rents, and argues for a radical reconfiguration of the politics of studentification based on intergenerationality. The final empirical chapter evaluates Waterloo’s attempts to bring more non-student residents into a near-campus neighbourhood, a process and policy I call “post-studentification.” Despite promise to address some issues, in practice, the strategy may not achieve its intended outcomes or be applicable as a model elsewhere, and may reinforce inequalities along the dimensions of class, age, and gender. As a whole, the research contributes to understanding student housing as a matter of “town, gown, and capital” by theorizing studentification and its relationship to other urban processes, including capitalist urbanization. It also illustrates the centrality of the life course to these processes. Finally, given the role of planning therein, the dissertation provides practical recommendations for formal planning practice, post-secondary education institutions, and housing advocates for building a more equitable post-studentification city.