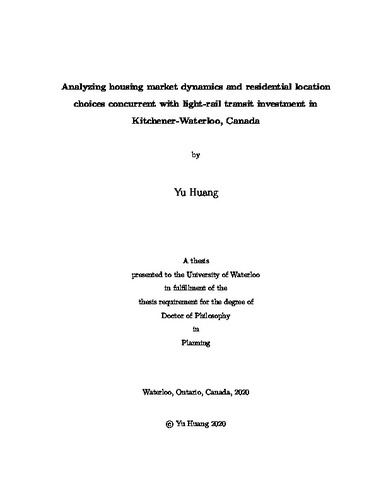 Transit investment and transit-oriented development (TOD) have become predominant planning policies to manage growth and limit sprawl. Waterloo Region implemented a light-rail transit (LRT) system aiming to provide alternative transit options and shape urban communities. Meanwhile, as one of the most fast-growing urban areas, the region has experienced rapid growth in population and employment. The booming high-tech industries, the international immigrants and migrants from the Greater Toronto Area (GTA) have all contributed to the increasing attractiveness of the region and its changing demographics, which in turn have heavily shifted the housing markets in the region. The housing prices have risen dramatically since 2014 and reached a peak in 2017 when the average sales price increased by over twenty percent from 2016. These changes occurring in the region have motivated this thesis to investigate 1) How have different housing markets in the region reacted to the LRT investment? 2) How might the LRT investment have influenced the residential location choices of various households? 3) Who might hold strong preferences for living in the TOD area? This thesis addresses these questions through three empirical studies. The first study presents a spatio-temporal autoregressive multilevel model to better examine the relationship between housing characteristics, transit investment, and housing prices. The proposed model is expected to improve the purely spatial hedonic price modeling in three aspects: i) controlling for both the spatial and temporal relations on housing price determination, i.e., the dependence on “recent comparable sales”; ii) considering the nesting structure of housing in neighbourhoods; and iii) accounting for the neighbourhood-level spatial interactions. Using 68,258 housing transactions occurring in Kitchener-Waterloo (KW) during 2005-2018, this study finds the better performance of the proposed models and provides strong evidence of the three distinct effects that underly the price generating process. According to the preferred model results, this study finds a significant housing price increase in the central-transit corridor (CTC), compared to housing outside the CTC, while the impacts vary for different housing types at different stages of the LRT implementation process. The second study seeks to delineate the housing demand structure in the region during the LRT construction. To this end, this research conducted a housing survey in KW through 2016-2017 and obtained 357 complete responses from homebuyers. Based on the survey data, this study performs a second-stage demand analysis and reports heterogeneous preference estimates of different demographics for dwelling and neighborhood attributes. Household structure and age seem to be the major demand shifters. This study also finds that both couples without children and seniors aged 55 and over are more willing to pay for the CTC area. The third study aims to identify household groups holding different preferences for TOD. Based on the survey responses regarding the importance of TOD features in residential location choices, this study conducts a latent-class analysis (LCA) and finds that 36.2 percent of households (primarily couples with children and with medium income) in our sample show a strong desire for TOD features, including LRT access, bus access, walkability, ease to cycle, access to urban centre and access to open space, although they purchased outside the CTC. This indicates a possible undersupply of housing in the CTC for these families with children. Through further examination of their preferences for other housing attributes, this study finds the adequate living space, garage and school quality are more important to these households. This thesis provides updated knowledge on housing market dynamics, housing demand and TOD preferences, which may help inform housing policies in the region to provide home options for a wide range of households inside and outside the central transit corridor and thus create vibrant and complete communities.