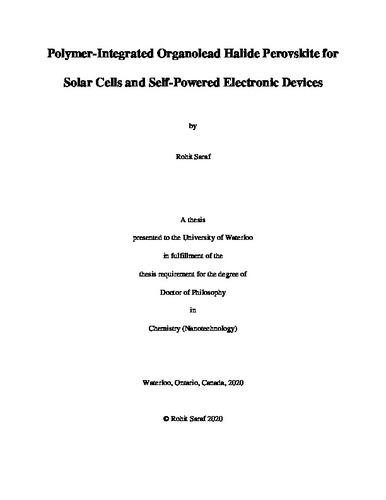 In recent years, organolead halide perovskites (MAPbI3) have emerged as prospective materials for high-efficiency, inexpensive, and simple solution-processed optoelectronic devices such as solar cells, photodetectors, and LEDs. High efficiencies have been achieved in the lab for the perovskite solar cells, however, their stability under ambient operating conditions is the major concern that needs to be addressed for their commercial viability. The key factors that lead to instability are the migration of the constituting ions under electric fields (typically MA+ and I−) and degradation due to photo-activation and humidity. Current strategies for stabilizing perovskites typically target the interface of the perovskite layer or isolate the perovskite layer from the environment by encapsulation or use of inert conditions. But these strategies do not affect the inherent ion migration characteristics of the perovskite material itself. We show that similar to biomaterials such as bones that incorporate biopolymers (such as collagen) within an inorganic framework (hydroxyapatite crystals), by incorporating polymer chains with specific interactions in the perovskite films this challenge can be addressed. We use the Lewis acid nature of PbI2, a key chemical for making MAPbI3 perovskite (and others) for in-situ cross-linking of polystyrene (PS) chains in the precursor solution. The resulting PS-MAPbI3 devices without any encapsulating layer show a stable crystal structure in ambient conditions after more than 1000 h of continuous 1.0 sun (AM 1.5G) illumination in the air (relative humidity of 40–50%) at 45 °C, while also showing a slightly improved device performance. The stability is the result of the direct specific interaction between the polymer and the perovskite that reduces ion migration, charge recombination, trap-state density, and dark currents and at the same time leads to improve mobility and carrier lifetime. The interaction between the polymer and PbI2 and MAI also improves the crystallization kinetics leading to larger grain size in the perovskite films. The cumulative effect of these improvements makes the reported polymer-perovskite hybrids well suited for long term device applications and presents a new avenue for making stable polymer-perovskite composites. MAPbI3 shows a distinctive combination of properties such as being semiconducting, with polarization and ion migration effects under poling by electric fields. The combination of its polarization and semiconducting nature is used to make a light harvesting, self-powered tactile sensor. Further, the integration of polymer chains leads to modulation of the mechanical properties in MAPbI3, making the films softer. As a result, these films have a lower modulus and are able to dissipate the applied mechanical stimuli. This sensor interfaces ZnO nanosheets as pressure sensitive drain on PS-MAPbI3 film and once poled is operable for at least 120 h with just light illumination. The sensor is monolithic in structure, has a very wide operating range (up to 450 kPa), a high linear sensitivity over the whole range, and can operate continuously as the energy harvesting mechanism is decoupled from its pressure sensing mechanism. The films have an energy harvesting density of 1.1 W m−2 due to stable poling effects, which is comparable to the best reported triboelectric harvesters. The understanding of these effects in perovskite materials and their application in power source free devices is of significance to a wide array of fields where these materials are being researched and applied. A monolith PS-MAPbI3 photodetector is also presented that utilizes the material properties of MAPbI3 perovskite leading for self-powered operation and achieves improved stability by compositing with PS. The self-powered operation makes this device suitable for remote sensing applications and smart systems. Improved stability of more than 20 days with performance maintained by over 80% under ambient conditions is achieved by incorporating PS without any additional fabrication steps. A plain MAPbI3 device in comparison shows a performance degradation of 70−85% within 4 days of operation. The incorporation of PS also improves the current detectivity of the device by over 70 times as compared to plain perovskite. The PS-MAPbI3 photodetector has a maximum photoresponsivity of 0.61 A W−1 and a detectivity of 1.5 × 1013 Jones. Stable self-powered operation is achieved by poling the PS-MAPbI3 under a specific condition, subsequently, a sustained current (or voltage, under open-circuit conditions) is observed on illumination. These results demonstrate a simple and promising approach for developing high performance and a stable self-powered photodetector for next-generation optical communication, sensing and imaging applications. The findings of this research to decouple the polarization and ion migration effects and using this understanding with the semiconducting properties in perovskites for developing light-powered devices will be of significant interest to the research community. This work also provides an insight into the improved perovskite stability and performance by the integration of a polymer which may lead to new avenues of polymer-perovskite composite assembly for long term device applications.