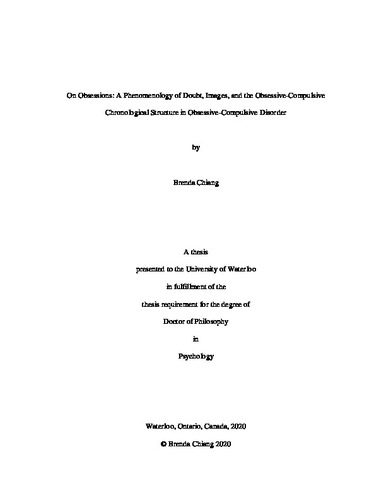 Obsessive-compulsive disorder (OCD) is a debilitating disorder that is heterogeneous in presentation and difficult to treat. Nearly half of treatment-seeking individuals do not benefit fully from therapy, and success rates have changed little over decades despite ongoing research into obsessions. These outcomes suggest that aspects of the OCD experience are being overlooked and not addressed in therapy, highlighting a need to revisit core assumptions the cognitive behavior therapy (CBT) model makes about the disorder. Indeed, there are significant gaps in the literature, revealing a lack of phenomenological grounding to support key assumptions made about obsessions and how they interact with compulsions in the model. In fact, there are scant existing studies of the true chronological nature between obsessions and compulsions (none interviewing individuals themselves), few studies of intrusive images despite their prominent place in diagnostic criteria, and woefully scattered investigations of doubt making it difficult to know how doubt should be defined in this ‘doubting disease.’ This dissertation thus aimed to address these lacunae by interviewing 65 individuals (44 diagnosed with OCD and 21 with subthreshold OCD symptoms) on these three domains using a structured interview developed for this study. Analyses of participant reports indicate that there is a significant need to revisit and possibly update the CBT model to highlight the interplay between obsessions and compulsions, and to underscore the complex relations between the ways in which obsessional content can appear (i.e., obsessional forms, such as verbal thoughts, mental images, or doubt, etc.). Specifically, obsessions were found to be more dynamic than we currently assume, typically appearing in three different forms at once and often taking place concurrently with and extending beyond compulsions. Moreover, the most distressing, noticeable, and powerful forms in which obsessional content appeared were those not currently recognized: namely, doubt, an internal voice or narrative (which participants distinguished from general verbal thoughts), and sensory phenomena. For that matter, respondents defined obsessional doubt as capturing three categories of concerns: doubts about their safety status (‘Am I clean?’), how properly they completed behaviours (‘Did I clean well enough?), and their own senses or cognitive capability (‘Am I remembering correctly that I cleaned?). Lastly, contrary to expectations, intrusive images were less prevalent, distressing, and personally significant than the few existing studies would suggest. These study findings have important implications for treatment and theory; applications of results and further areas of study are discussed.