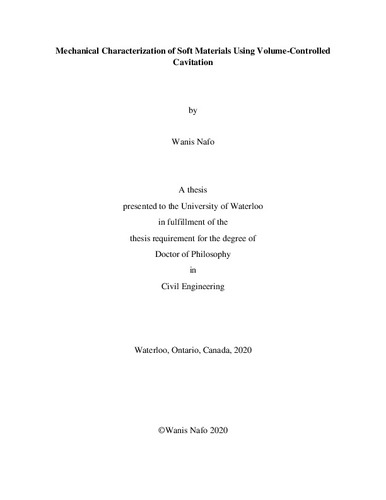 The mechanical properties of soft materials are used in a wide range of fields and applications including biomedical engineering, sports, and automobile industry, in addition to medical applications. Therefore, several methods have been used to measure these properties including tension, compression, and indentation. This study focuses on the application of multiaxial loading using cavitation mechanics to measure nonlinear mechanical properties of soft materials. It was found that applying controlled cavitation within the internal structure of soft materials provided enough information to characterize their mechanical behavior. This is done by inserting a needle-balloon tool inside the tested material while being attached to a system that allows for injections of an incompressible fluid (water) into the balloon. To establish this methodology as a robust characterization technique of the mechanics of soft materials, it was used in a four-stages investigation: developing an analytical framework to characterize the non-linear elastic behavior of rubber-like materials (elastomeric gels), measuring the hyperelastic properties of soft biological tissues (porcine liver), comparing the cavity expansion test with a conventional uniaxial tensile testing, and establishing an analytical framework to characterize the time-dependent behavior of viscoelastic materials. In the first stage, a solution that relates the applied radial loads and tangential deformation is introduced. This solution allows the calibration of hyperelastic strain energy functions (SEF), which were Yeoh, Arruda-Boyce and Ogden (used in all stages). Finite element simulations were used to validate the material parameters of the three hyperelastic models. Computed tomography (CT) imaging was used to validate the spherical configuration assumption of the inflated balloon inside the sample. The validation process considered the two types of stresses generated during the test, radial and hoop stresses. It was observed that the radial stresses were insignificant compared to the hoop stresses. In the second stage, a smaller balloon was used to test porcine liver tissues; however, the protocol of this stage was similar to the first stage. Few changes were introduced to the definition of the deformation term, as a result, the measured deformations in the cavity test coincided with the deformation levels reported in literature. In addition, the three hyperelastic models predicted initial shear moduli that agreed with their counterparts reported in literature using conventional testing techniques. To understand the similarities and differences between the cavity expansion test and conventional axial loading, the third stage addressed the comparison between the cavitation and uniaxial tension characterization. The comparison focused on the stress levels, range of strains as well as the initial shear moduli. It was found that the strain levels in the hydrogels were similar up to the failure point. In addition, the hoop stresses generated due to cavity loads were similar to the tensile stresses generated in uniaxial tension up to a strain level of 45%. Afterward, hoop stresses increased exponentially reaching a peak magnitude that was twice that observed in the uniaxial tension. Since the radial stresses were insignificant, the previous two observations provided an indication to the equi-biaxial nature of the cavity expansion test. The final stage of this study addressed the characterization of the viscoelastic properties of rubber-like materials. In this stage, linear viscoelastic theory was used. The cavitation rheology is used to measure the non-linear elastic response of the hydrogels at three different strain rates. The simple shear relaxation test was used to measure the viscous response of the hydrogels. While the elastic material parameters were calibrated using the same method used in previous stages, the viscous coefficients of the Prony series were determined using Abaqus’ calibration tool. Afterward, the elastic parameters and viscous coefficients were used to reproduce the experimental data numerically using FE simulations, and analytically using Matlab code. The agreement between experimental data, FE simulations and the analytical code showed that the cavity expansion test was capable of measuring the time-dependent response of rubber-like materials.