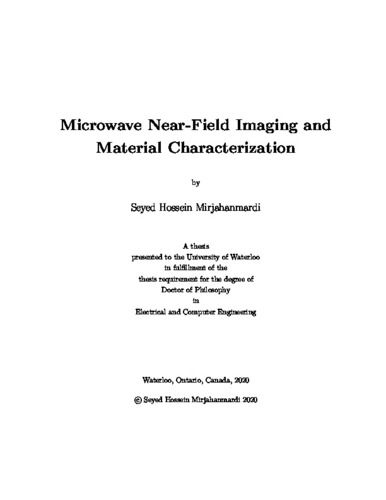 In recent years, microwave imaging has attracted many researchers from various fields such as medical imaging, remote sensing, and industrial ones because of its high degree of penetration, non-ionizing and safe nature, and the low-cost of devices needed to generate images at low frequencies. This modality has great potential for producing unique and informative images because the response of materials, including human tissues, to electromagnetic excitation differs as the material's electrical characteristics change. Although microwave imaging has potentially distinctive features as an imaging modality, main challenges still exist. The penetration level of waves and their operation frequency have an inverse relation, meaning that to sufficiently penetrate the objects and identify small changes, such as anomalies in human bodies or an object, low-frequency waves are needed as excitation. However, decreasing the frequency degrades image resolution, a barrier in microwave imaging research. Other challenges are the need for simulations models, high computational resources, and significant processing time to retrieve the image of the object under test (OUT) beyond the diffraction limit. The high-resolution imaging algorithms reported in the literature are based on simulation-measurement combination. These algorithms are iterative and optimization-based, meaning that to reach an acceptable answer, numerous simulations need to be run. In addition, such iterative algorithms depend strongly on proper initialization to converge, which requires prior information that is not available unless MRI or CT images are taken and fed to these algorithms. This single initialization may not be enough if the OUT changes over time. For example, in the case of medical use, if a cancer treatment such as chemotherapy is ongoing, the tissues and therefore the OUT structure may change. In such cases, the first initialization no longer valid, resulting in the need for new MRI or CT images to be taken. But the need for such processes to create a microwave image, if medical use is concerned, violates the main goal of this modality: mass screening for early cancer detection. The other challenge of a microwave image is its resolution, which strongly depends on the operation wavelength and in most cases is much larger than the desired anomaly to be imaged. Having a large wavelength increases the diffraction phenomenon that occurs in the OUT while waves propagate. Thus, the wave energy packet spreads through the medium. The inverse algorithms reported in the literature, that take the diffraction phenomenon into account, are inherently ill-posed, meaning that a unique solution cannot be obtained unless some prior information is used. These algorithms are simulation-oriented, and consequently, are time-consuming, model-based, and do not produce reliable answers. The noticeable advantages of generating images at low frequencies have convinced us that microwave imaging modality has a strong role to play, potentially in medical applications. To address the aforementioned challenges regarding the microwave imaging approaches reported in the literature, this research work proposes to use narrowband electrically small antennas in the near field along with the Radon transform and filter-back projection as the reconstruction algorithm. Designing proper electrically small antennas significantly reduces the diffraction occurring in objects under test. Therefore, waves no longer spread in the OUT, only minimum coupling occurs between its layers, and the waves instead propagate in straight lines. This ray-like behavior of waves allows us to apply one of the most powerful reconstruction algorithms used widely in clinical imaging, the filtered-back projection algorithm, based on Radon transform. This algorithm, which is the basis of computerized tomography, needs no simulation or initialization. Thus, no optimization is used; the result is reliable images. In addition, the probes designed for the tested prototypes operate at low frequencies, which results in high penetration, and the waves excite the internal parts of the OUT. Major distinguishing features of the proposed system are the low-cost devices needed to generate images from the OUT, its safety, and the high penetration of waves capable of sensing in-depth anomalies. In addition, the reliable reconstruction algorithm that has been developed in this research work makes the proposed microwave imaging system unique. Unlike other high-resolution microwave imaging algorithms developed, the algorithm proposed in this work is computationally low-cost and needs no prior knowledge or simulations. The preliminary images generated using the suggested system promise a future for microwave imaging modality. This system can potentially open new windows in the area of microwave imaging and improve medical imaging algorithms for mass and frequent screening.