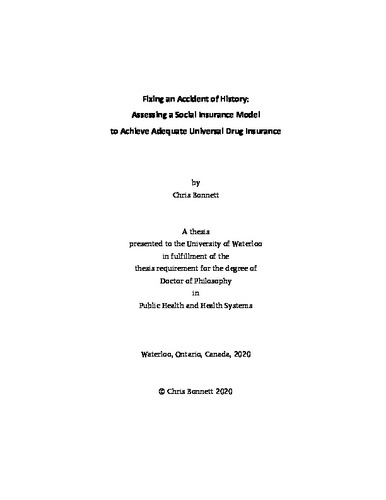 Canada’s drug insurance system remains fragmented and expensive. The plethora of private and public plans still do not adequately cover all Canadians. Demographic changes, disease profiles and the introduction of many new very high cost drugs mean Canadians will be increasingly unable to afford access to medically necessary drug therapy. The lack of adequate universal drug insurance, a policy known in Canada as national pharmacare (NPh), is an important problem. A solution must address patient needs for access and equity at a cost that is sustainable to payers. Most academic literature has identified a public single payer model as the optimal approach but despite many studies and reports, this has yet to be implemented. This suggests the need for an alternative. The Canadian alternative to a single payer plan is popularly called “fill the gaps.” This approach argues that the federal government should target its funding to expand provincial coverage to cover the uninsured. A social drug insurance model, used in many European countries, retains private insurance but improves on it by regulating, structuring and aligning it with medicare. As such it is the logical proxy for those who favour “fill the gap.” Social insurance may achieve adequate universal drug insurance at a much lower per capita cost. Social insurance financing relies primarily on employers and workers, which is very similar to our very large private drug insurance market. However, private drug plans are mostly tied to employment, are voluntary and face similar threats to sustainability and affordability as provincial plans. An organized mixed-financing model like social drug insurance would spread risk and is a more feasible approach than a single payer plan to achieve adequate universal drug insurance. If a comprehensive single payer NPh plan is not implemented, adopting key social insurance features and regulations would significantly improve access and quality. An extensive literature review is presented, followed by a qualitative thematic analysis of drug insurance opinion leader interviews and a comparative analysis of health and drug systems in three jurisdictions. The theoretical perspective of how a government may recognize and prioritize certain problems over others draws on John Kingdon’s Agendas, Alternatives, and Public Policies (2011). Major findings are found in four chapters. Chapter 4 examines our current shared-funding model for prescription drugs and establishes that social drug insurance could work in the context of our institutionalized model. Chapter 5 provides a comparative review of social health insurance (SHI) models in Germany, the Netherlands and Quebec to help identify the form and features useful in a pan-Canadian system. Certain features warrant serious consideration in Canada. The Netherlands has created an aggressive drug price and cost control architecture. Germany’s Federal Joint Committee is a participatory multi-stakeholder governance model that could improve transparency and better address system complexity and sustainability. Quebec provides 20 years of guidance on key drug system features and risks in a Canadian context. Chapters 6 and 7 present the most important findings from 26 interviews with drug plan experts and influencers in different sectors from across Canada. Thematic analysis identified five roles for the federal government: funder, coordinator/secretariat, leader, relationship manager and nation-builder. These can be operationalized as funding that ensures adequate universal access, the creation of national standards for a list of covered drugs (formulary) and for patient cost-sharing to limit personal financial risk. Most participants wanted private insurance to continue as a significant funder but private payers remain marginalized, “outside the tent” in this policy debate. Employers are important funders and have not been extensively consulted. Relationships and trust among key stakeholders are limited or weak. These are crucial constraints to progress. Kingdon’s model, explored in Chapter 8, indicates the problem, policy and political streams are no longer aligned, so a window of opportunity for universal drug insurance has become far less likely. However, the window could re-open with less ideological stances by advocates supporting either model. This requires a standing forum for constructive and time-bounded dialogue to produce a strategy, funding structure, a realistic implementation plan and a modern governance model. Participants recommended the federal government play this leadership role. An influential NPh policy entrepreneur would energize this work. Related structural changes have recently been proposed to reduce drug prices and costs, such as reform of the Patented Medicine Prices Review Board, the creation of a new Canadian Drug Agency and a strategy for drugs for rare diseases. These financial changes are very important, but are not a comprehensive reform and will not in themselves assure adequate universal drug insurance. NPh is still needed and must proceed in parallel given its complexity and long gestation period. A carefully designed social drug insurance model that includes a regulated role for private drug plans would spread risk among payers, reflect our social values, provide choice in coverage and enable access to sophisticated consumer- and patient-focused insurer technology that complements public plan expertise in health technology assessment. Mitigating financial and political risk is important to governments, and moving to implementation is important to patients. Social drug insurance is still a very complex, multi-year change, meaning careful, consultative planning for implementation and transition is crucial. This model could serve as a template to achieve universal funding for other core health services, such as long-term care and community care. Kingdon notes policy change is more likely if complexity, confounding information and financial and reputational risk for governments can be reduced. Rather than a polarized, dichotomous and perpetual debate typical of decades of NPh failure, a classic Canadian compromise may be possible that allows adequate universal drug insurance to be more quickly implemented through a hybrid model.