Finding a New Commons: Re-Inhabiting the School in Post-Urban Japan 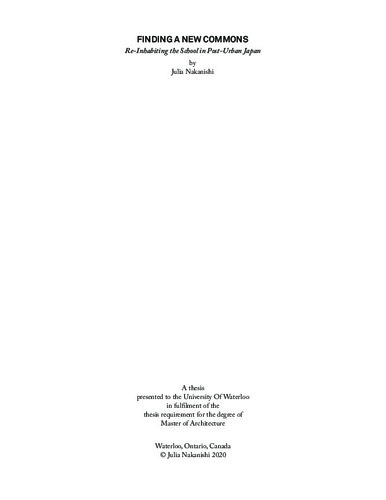 Japan’s megacities are often captured as dense, dynamic and ever-expanding. These images, disseminated in popular media, belie a growing national phenomenon; urban migration, a declining birthrate and an aging population have transformed Japan’s countryside over the past thirty years. These demographic changes have had a slow but dramatic effect, resulting in socio-economic decline, abandoned buildings and a loss of local cultures across the country. This thesis explores how re-inhabited architecture might facilitate the preservation of culture, knowledge, education, and community connections to local contexts. Among the vast number of leftover buildings in Japan’s rural areas, the public school is becoming increasingly prevalent due to waning fertility rates. These vacant structures, referred to as "haikō" in Japanese, are imbued with collective memory. In villages needing a revival of public and cultural spaces, schools with existing relationships to the community are potent opportunities for re-use. Using fieldwork consisting of documenting haikō in three culturally and geographically distinct sites (Sado Island, Niigata Prefecture, Kamocho region, Tsuyama Municipality, Okayama Prefecture, and Kamiyama Village, Tokushima Prefecture), and ethnographic interviews with community members, the three design projects of the thesis explore how the re-use of haikō could generate new rural lifestyles and micro-economies. The research presents emerging methodologies for designers working in the context of depopulating communities, which includes interviews with communities, analytical site mapping, and techniques of building re-use. This concept of “degrowth” poses a challenge for architecture, a profession significantly influenced by the capitalist structures and administrative frameworks of urban areas. In this way, Japan’s rural areas, or “the post-urban” are a testing ground for new design processes, programmatic overlaps and plurality in public architecture.