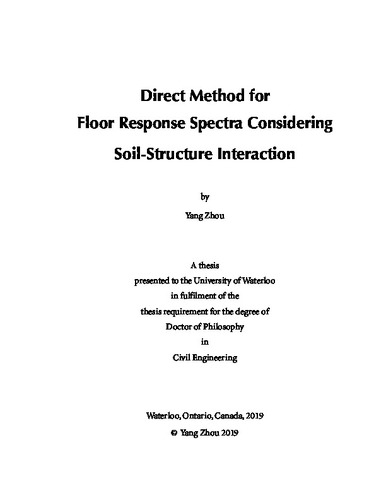 Soil-Structure Interaction (SSI) analysis is required in structural dynamic analysis under seismic excitations in the current standards, and it significantly influences the Floor Response Spectra (FRS),which are used in the safety assessment for the secondary systems in nuclear power facilities. A direct spectra-to-spectra method is well developed to generate FRS in fixed-basemodels efficiently and accurately. Thus it is necessary to address SSI effect and integrate it into the free field motion as the seismic input for the fixed-base model. For the fully or partly embedded nuclear power reactors, earthquake excitations come from both bottomfoundations and external structures. In this case, the foundations and external structures behave like a foundation systemwith seismic input atmultiple supporting points. The objective of this study is to develop an approach to address SSI effect considering the foundation flexibility and spatially varying ground motions. A substructure method is analytically derived to convert the three dimensional free field motion, i.e., Foundation Input Response Spectra (FIRS) given by site response analysis, into Foundation Level Input Response Spectra (FLIRS). The latter can be used as the seismic input in the direct spectrato- spectra method to generate FRS considering SSI. Only FIRS, dynamic soil stiffness, mass matrix, geometry of the structure, and basic modal information, including natural frequencies and modal shapes, are needed. Both flexible and rigid foundations are considered under the excitation of spatially varying ground motions or uniform seismic input. Furthermore, parametric study is performed to examine the influence of the foundation flexibility on SSI analysis and the resultant FRS. It is observed that FLIRS and FRS are amplified significantly due to SSI effect. This amplification is more severe and the associated frequency is smaller with amore flexible foundation. A semi-analyticalmethod is proposed to generate dynamic soil stiffness of rigid foundations and flexible foundations. Given the soil properties, the Green’s influence function is formulated analytically from wave propagation functions. And Boundary ElementMethod (BEM) is employed to determine the dynamic stiffness of foundationswith arbitrary shapes. The resultant 6M×6M dynamic soil stiffness matrix is then used as the generalized soil springs in the proposed substructuremethod. This study presents a fully probabilistic method for addressing the uncertainty resulting from seismic input and soil properties in the generation of FRS.A large number of FLIRS are developed byMonte Carlo simulations,which enables the uncertainty to be propagated from site response analysis to SSI analysis consistently. Then a uniform hazard FLIRS is obtained. Compared to the approach specified in current codes, the uniform hazard FRS lowered the seismic demand significantly to provide amore economical solution for seismic design. Meanwhile, it overcomes the underestimation of FRS by current method in some frequency range. A realistic and continuous distribution is proposed for shear wave velocity (Vs ) to replace the current application. Sensitivity study is performed on the correlation coefficient and the standard derivation of Vs. The results show that these two parameters do not influencemuch in uncertainty analysis. Based on the proposed method, SSI analysis is performed in a realistic model to develop uniform hazard FLIRS for performance-based seismic design, and the direct spectra-tospectramethod is extended to generate safe and economical FRS considering SSI.