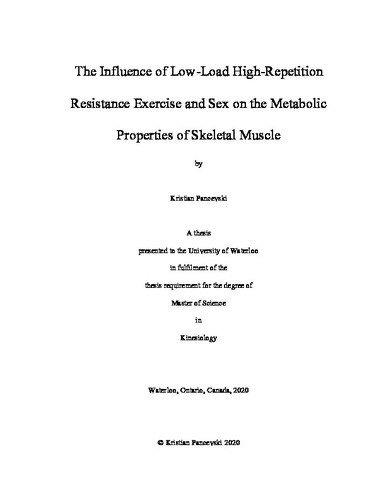 INTRODUCTION. The findings of exercise trials have shown that women are better able to initiate aerobic metabolism and are less reliant on anaerobic energy stores. The effect that LL-HR resistance exercise and sex has on substrate oxidation and metabolic species remains unknown. PURPOSE. The purpose of this study was to characterize anaerobic fuel utilization patterns during a bout of LL-HR resistance exercise and to assess whether sex influences fuel utilization during LL-HR. METHODS. Twenty young, healthy participants (n=10 men and women) were recruited and matched for VO2peak relative to fat-free mass and habitual resistance training. The LL-HR bout consisted of a circuit of chest press, leg extension, lat pulldown, hamstring curl, shoulder press, and leg press for 25-35 repetitions at 30% of 1RM with 30s rest between each exercise and 2 minutes rest between circuits. Western blot analysis was completed for relevant metabolic enzymes; GP, PFK, LDH (H and M), PDHE1, PDHK4, CK, AMPD2, MCT (1 and 4), and phosphorylated CK and PDHE1. Content of metabolic species was analyzed before and after the exercise bout and included measures of creatine, ATP, lactate, Pi, pyruvate, and glycogen. MHC staining was used to determine the distribution of fibre type between men and women. Blood lactate was measured and area under the curve (AUC) calculated. RESULTS. Women had a greater type I muscle fibre content than men (p=0.007). Baseline content of all enzymes of interest were similar between men and women (p>0.05). Men had higher concentration of muscle glycogen, lactate, ATP, and Pi than women (p=0.001, p=0.019, p=0.01, and p=0.007, respectively). Phosphorylation status of CK and PDHE1, and content of glycogen and ATP all decreased in men and women with exercise (p<0.001). Phosphorylation state of CK decreased more in women than men (p=0.023); whereas creatine concentration increased during exercise to a greater extent in men than women (p=0.026). Blood lactate increased during exercise (p=0.023), with no differences between the sexes (p = 0.235). CONCLUSION. Men rely to a greater extent on the HEPT system to produce ATP during a bout of LL-HR resistance exercise than women. Interestingly, this occurred despite a greater decrease in phosphorylated CK in women. Overall these findings are supportive of the hypothesis that men rely to a greater extent on anaerobic fuel sources during exercise, which may be in part due to their greater content of type II muscle fibres.

Kristian Pancevski (2020). The Influence of Low-Load High-Repetition Resistance Exercise and Sex on the Metabolic Properties of Skeletal Muscle. UWSpace. http://hdl.handle.net/10012/15609