Analysis of the linguistic repertoire of a migrant family 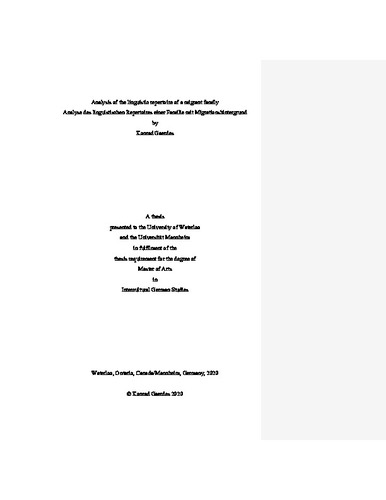 The increase in mobilization that globalisation brings with it leads to an increasing amount of language contact. When groups or migrants come into contact with majority languages of a country, the minority language often undergoes changes. It is when these changes occur that we can analyse the language of these migrants to find out how they use language, mix language, and also analyse how their language changes due to language contact. In this thesis, I analyse a family of South-African-Canadians that speak German at home in order to find out how their immigration trajectory (from their ancestors moving from Germany to South Africa, and this family’s move to Canada) is showcased in their linguistic repertoire. Their linguistic repertoire is defined as “the set of varieties used in a speech community in various speech situations” (Finegan, 2004, p. 335). In order to carry out this study, I analyse the origins of some aspects of their repertoire and how these aspects set their repertoire apart from standard German. This analysis is based on participant observation, field notes, and recorded observation. I use discourse analysis to analyse the functions of two parts of speech, sowie, which, I argue, has some similar characteristics as like in English, as well as so, which is pronounced in a South African accent and has similar functions to the discourse marker so in English. In this family’s repertoire, sowie is pronounced differently, namely that the emphasis is on the first syllable instead of the last, like it is in standard German (“Duden: Sowie,” 2019). This sheds light onto how the convergence of languages is showcased in this family’s repertoire. I have chosen these two lexical items because they occurred often in my recordings and seemed to be characteristic of this family’s speech and I did not seem to exist in standard German. Furthermore, they seemed to stem from English, and this would provide insight into how the results of language contact can be observed in speech. iii The results of this study show that discourse markers can be borrowed from languages in the same way as individual words can. What is also shown is that translations of discourse markers can also be made and adopted into a repertoire, and that even with the translation, the discourse marker can maintain its original function. This is showcased by the discourse marker sowie in this family’s repertoire, which is a translation of like in English and has some of the same discourse marker functions as like does in English. By using aspects of different languages with which they have come into contact, this family displays their transportable identities (Zimmerman, 1998) through their repertoire.