From Houses to Hillsides: Support for Adaptive Housing on Hong Kong's Slopes 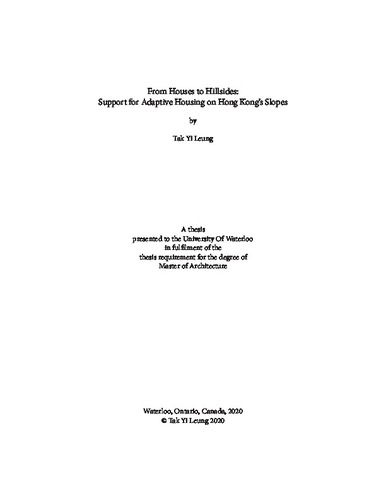 Hong Kong’s urban development is governed by the mountainous terrain of the city. The city is growing, and easily developable low-lying flat land is becoming increasingly scarce. As a result, Hong Kong’s development is conflicted between the hillsides of the landscape and the urban built environment. On one hand, the avoidance of hillsides, characterized as liabilities, has created a hyper-dense environment where real estate economics and speculation separate public and private housing sectors with little opportunity for alternative affordable housing options. On the other hand, as urban expansion encroaches ever closer to the slopes of the city, new strategies for slope stabilization infrastructure are required for improved safety and resilience. With no resolution to this spatial struggle, informal settlements arise to create affordability through the absence of formal regulation, but these structures pose psycho-social and physical risks to their inhabitants. Rather than attempting to provide housing in an all-or-nothing manner, we can think of housing as an incremental process where citizens foster their social and economic capital. By acknowledging informality as a process that functions within the market, we break down the legal apartheid between formal and informal, and begin to design with, rather than against, bottom-up approaches to high-density urban living. Through the redesign of slope infrastructure with architectural foundations, and the integration of services and amenities, we plant the seeds for building to occur on a site that would otherwise be avoided by conventional development. Expanding on existing geotechnical and slope landscaping methods, the man-made slope in the Mei Tung Estate in Kowloon is transformed into a support framework acting as both the stabilization for the slope and the foundation for transformative infill housing. It provides the basic services for occupation where homes can grow with participatory design and collective action. This foundation is not only a spot on which residents can build, but as a component of the three-dimensional public realm of the city, it also offers opportunities to foster social capital within the larger Hong Kong society to improve social cohesion and integration. The focus is on providing the architectural framework in which healthy, safe, and economical inhabitant-driven building can occur. Housing is not a product for the inhabitant, but a process in which families can make a place to call home.