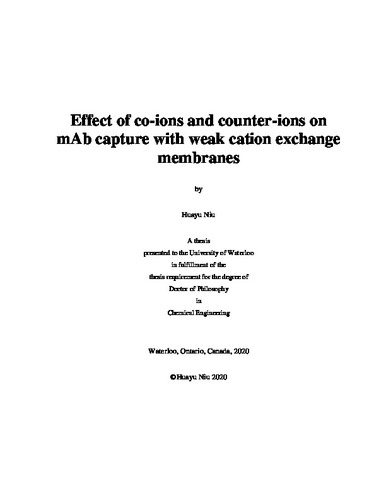 Cation exchange chromatography (CEX) has risen as a promising alternative to Protein-A affinity chromatography for the capture of monoclonal antibody (mAb). mAb capture with CEX works on the basis of electrostatic interactions and is sensitive to buffer conditions, especially for weak CEX materials that present variable ionization according to buffer pH. While mAb capture with CEX is primarily based on strong CEX resins, CEX membranes are advantageous as they do not cause high pressure drop that is associated with resins. It is critical to investigate the role of buffer conditions on the performance of IgG/mAb binding with weak CEX membranes. The main objective of this PhD work was to investigate the role of buffer on IgG/mAb binding with weak CEX membranes and on IgG/mAb unfolding, based on which the design space was developed for mAb capture with CEX to assure process productivity and product quality. Buffer effects were investigated in terms of buffer pH, concentration of buffer cations (or counter-ions in CEX), concentation of buffer anions (or co-ions in CEX) and type of buffer anions. Two commonly used buffers in CEX, phosphate citrate buffer (contain multi-valent co-ions) and acetate buffer (contain monovalent co-ions), were employed. The model proteins include IgG for its cheap cost and availability in large quantity, as well as a humanized mAb, Bevacizumab and a chimeric mAb, Rituximab. The weak CEX membrane employed is Natrix C weak CEX membrane, as it possesses a high binding capacity at optimized buffer conditions. Methodologies employed in this work include, swelling experiment, Environmental Scanning Electron Microscopy (ESEM), static and dynamic protein binding, high-throughput intrinsic fluorescence measurement, size-exclusion liquid chromatography (SE-HPLC) and Design of Experiment (DoE), response surface model (RSM), two adsorption models, the Langmuir model and the steric-mass action (SMA) model. The first section of this work focuses on investigating the buffer effects on IgG/mAb binding with weak CEX membranes, which will facilitate the subsequent design space development for improved process productivity. The structure of the weak CEX hydrogel membrane employed in this work is sensitive to buffer conditions. The role of buffer pH, counter-ions, and co-ions on the membrane swelling behavior and its surface morphology was investigated through swelling experiment and ESEM. Buffer pH and counter-ions had a significant influence on membrane swelling and membrane pore size, while the effect of co-ion type was negligible. The role of buffer conditions, especially the co-ion type on static IgG/mAb binding with Natrix C weak CEX membrane was then quantified with two adsorption models, the Langmuir model and the steric mass-action (SMA) model. The estimated model parameters of both adsorption models revealed the significant effect of co-ions on IgG binding. It was proposed that multi-valent co-ions may promote the binding affinity compared to monovalent co-ions by creating more binding patches on the IgG surface [1]. Co-ions may also affect the structure of IgG molecules thus changing the IgG binding capacity. When investigating the effect of co-ion type on static Bevacizumab binding with Natrix C weak CEX membrane, it was found that the co-ion effect was only significant at relatively high concentration. The second section of this work focuses on developing an efficient tool for investigating the structure of IgG/mAb and then applying the tool for investigations on buffer effects on IgG/mAb structure. A high-throughput intrinsic fluorescence microplate method was developed for fast detection of IgG/mAb structural changes. Comparison of the emission spectra of thermally stressed IgG samples collected from a cuvette spectrofluorometer and a fluorescence microplate reader demonstrated that the intrinsic fluorescence microplate method was as efficient in detecting IgG structural changes as its counterpart. The method was also shown to be effective in detecting structural changes of thermally stressed Bevacizumab and the effect of buffer conditions, especially the counter-ion concentration (Cs) and co-ion type. Both Cs and co-ion type had significant effect on the structural changes of mechanically stressed IgG, where higher Cs induced protein unfolding, and co-ion type affected structural changes. The effect of co-ion type on the unfolding of Bevacizumab after binding with a weak CEX membranes was significant at a relatively high initial concentration ( 7 mg/mL). The structural changes of mAb were also related to the monomer percentage detected by SE-HPLC. Finally, a framework for design space development for mAb capture with weak CEX membranes was established. The first step was the identification of critical process parameters through risk assessment, where four critical parameters were identified as buffer pH, buffer molarity, Cs (Na+ concentration) and mAb concentration based on the literature. The second step was to study the characterization range of buffer pH, molarity and Cs (Na+ concentration) through static binding, to identify the range of conditions for high Rituximab binding capacity and low Rituximab structual changes. The third step was developing the design space with a response surface model (RSM). The construction of the RSM was based on a DoE study of the four critical parameters at three levels for static Rituximab binding with Natrix C weak CEX membrane. The fourth step was to examine the RSM through performing static Rituximab binding and dynamic Rituximab binding with Natrix C weak CEX membrane at the optimal buffer conditions estimated with the RSM. In conclusion, this study shows that co-ions have significant effect on the structural changes and the binding of IgG, Bevacizumab, and Rituximab with Natrix C weak CEX membranes, and should not be overlooked in optimizing the buffer conditions during mAb capture with CEX membranes. The intrinsic fluorescence microplate method was demonstrated to be an efficient tool in analyzing the structural changes of IgG/mAb. The SMA adsoprtion model could be used to investigate buffer effects on IgG/mAb binding and as an supplementary tool to investigate buffer effects on the structural changes of IgG/mAb. The framework for design space development established in this work can help significantly improve the efficiency of process development for mAb capture with weak CEX membranes.