Towards On-demand Generation of Entangled Photons with Quantum Dots 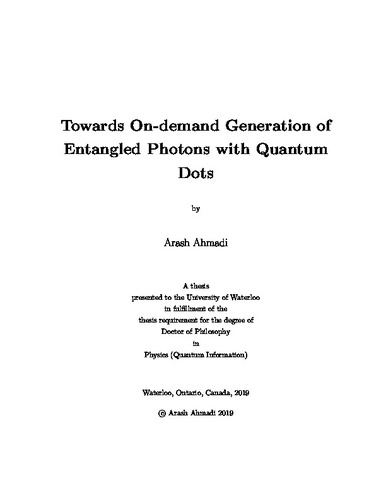 The biexciton-exciton cascade in quantum dots (QDs) yields entangled photon pairs, and recent developments in engineering photonic structures around the dot for efficient light extraction and proper control of the fine-structure splitting, has led to significant breakthroughs in achieving an ideal entangled photon source -- exhibiting properties such as high extraction efficiency, low multi-photon emission and high entanglement fidelity. This thesis presents our development in enhancing the performance of entangled photon generation of QDs towards near-unity efficiency and fidelity. We study InAsP quantum dots in photonic nanowires for efficient light extraction and to reveal the effect of a quantum dot with high nuclear spin on the entanglement fidelity. Revealing the ultimate limit of entanglement in QDs is still a challenge, and it is generally believed that a sample made of atoms possessing high nuclear spins exhibits limited entanglement due to the dephasing caused by spin-spin interactions. Moreover, it is assumed that the fine-structure splitting of QDs degrades the entanglement fidelity, as it introduces a which-path information in the biexciton-exciton cascade. We have performed two-photon state tomography on InAsP QDs in InP nanowires, comprising of nuclear spin 9/2, and have realized that such a source is capable of generating entangled photon pairs with negligible dephasing during the emission lifetime, with a peak concurrence C = 77% and a count-weighted average concurrence 62%. This result was obtained by comparing the outcome of our measurements with a theoretical model that assumes no dephasing, however, takes into account the details of the detection system, i.e., dark-count rates and timing resolution, as well as, specific features of the QD, e.g., emission lifetime, fine-structure splitting, multi-photon emission probability, etc. Proper engineering of tapered nanowires allows for extraction of the emitted photons with high efficiency, which makes it possible to perform a complete two-photon state tomography and monitoring the evolution of the exciton state, as well as, the entanglement fidelity of the photon-pair, during the emission lifetime. This enabled us to reveal the effect of an imperfect detection system, as well as, multi-photon emission in recording low values for entanglement fidelity. Moreover, our calculations show that proper analysis of the time-energy uncertainty relation provides the necessary means to measure a high entanglement fidelity even in the presence of fine-structure splitting; since, a detection system with high timing resolution can overlook the which-path information, as the uncertainty in measuring the energy of the photons will be larger than the fine-structure splitting. Therefore, realizing near-unity entanglement fidelity using QDs is merely a technical challenge, i.e., resonant excitation of the QD, in order to suppress multi-photon emission, and use of a detection system with low timing jitter and dark-count rates. As a next step to achieve this goal, we have performed the resonant two-photon excitation scheme for the first time on a QD in a photonic nanowire, which resulted in an enhancement of the performance of our source. We managed to improve the single-photon purity of the source, g^(2)(0), by two orders of magnitude; moreover, analysis of the emission spectrum reveals that this scheme increases the pair-production efficiency to values above 93% for the biexciton-exciton cascade. Taking the efficiency of our experimental setup into consideration, the results indicate an approximately eight-fold enhancement of the pair-extraction efficiency as compared to the quasi-resonant excitation scheme (12.55% vs. 1.6%). Based on these results, two-photon state tomography on our source, under resonant two-photon excitation and performed by a detection system with high timing resolution and low dark-count rates, yields near-unity entanglement fidelity. By considering the enhancement in pair-extraction efficiency that we obtained, QDs in photonic nanowires can surpass the performance of spontaneous parametric down conversion sources in terms of entanglement fidelity and pair-extraction efficiency. Even though we have shown a finite fine-structure splitting does not degrade the entanglement fidelity in QDs, for various application in quantum information removing the fine-structure splitting is beneficial. Therefore, we have proposed a universal all-optical approach for removing the fine-structure splitting. In this scheme, the energy of the photons are shifted by using a pair of quarter-wave plates and fast-rotating half-wave plates after they have been emitted; and as a result, the energy difference between the two decay paths in the biexciton-exciton cascade is erased. This method is applicable to any QD source and can be easily implemented using the currently available technology; moreover, no further sample processing will be required in order to achieve zero fine-structure splitting.