Next Babylon: A Virtual Cartography of Utopia 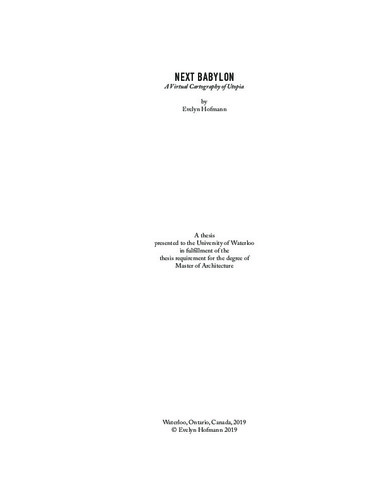 Migration is one of the defining issues of our time. Over the duration of writing this thesis, the total population of forcibly displaced people has increased from 65 million to more than 70 million people worldwide.[i] The contemporary phenomenon of global migration is representative of an “irrepressible desire for free movement” motivated by forces that Michael Hardt and Antonio Negri argue both “negatively” push and “positively” pull.[ii]However, the promise of globalization to weaken the physical borders that divide us has masked the reality of an expanding and intensifying infrastructure of borders reaching from the militarized edges of nation-states to spaces of everyday life. This network of borders and bordering technologies functionally produce spatial-temporal divisions and enclosures to restrict, manage, differentially include/exclude or pause movement. The violence and insecurity (im)migrants experience is not an inevitable result of their movement or circumstances. People have always moved, but migration today is acutely subject to asymmetries of power mediated by an abstract and fragmentary global border regime, which perpetuates displacement and forced migration to maintain and expand Empire. This planetary phenomenon is entangled in legacies and ongoing impacts of relational structures and systems of dominant power, including colonialism, imperialism, white supremacy and capitalism. Moreover, these oppressive hierarchies and conceived divisions are inscribed and reproduced within the built environment. Borders are spatial representations of power that materially enforce and sustain imaginaries of legality and illegality as well as shape the lived conditions that determine why and how people may move. Despite these barriers, there has been an emergence of informal encampments across Europe. These spaces are inherently paradoxical: while they represent imposed control and purposeful abandonment that makes free movement impossible, they are also representational spaces that reveal the need and potential for a possible alternative future. Next Babylon[iii] is a thesis concerned with examining these spatial conditions of migration and borders at three scales: Europe, France, and Paris. The human struggle with identity and place in the context of crisis is a common theme that inspired utopian responses throughout history. The idea of utopia has long been pursued in the realm of architecture. However, the designed responses to crisis often act as top-down solutions, or static representations of a future lacking a relationship to real dynamics of societal transformation. Rather than imagining what a world without borders would look like, this thesis takes on Henri Lefebvre’s position by arguing that utopia is an ongoing social process of positive and critical engagement with the present. A conceptual, methodological framework based on Lefebvre’s trialectic(s) is constructed and tested to reflect on this phenomenon of the present and to illustrate how spatial transformation through differential social use can make legible underlying socio-political conditions, tensions or contradictions. This analysis of contemporary bordered space, its production, occupation and transformation, provides evidence of ongoing societal change; a virtual cartography of utopia unfolds as a process, oriented toward a possible/impossible future. [i] “UNHCR Population Statistics Database,” UNHCR, accessed November 12, 2019, http://popstats.unhcr.org/en/overview [ii] Michael Hardt and Antonio Negri. “Counter-Empire,” Empire (Cambridge, MA: Harvard UP, 2000), 213. [iii] This title of this work is inspired by Constant Nieuwenhuys’ utopian project, New Babylon(1959-74).