"Feeling out of place suddenly, and you haven't even moved": Food gentrification, alternative foods, and sociospatial justice in Downtown Kitchener, Ontario 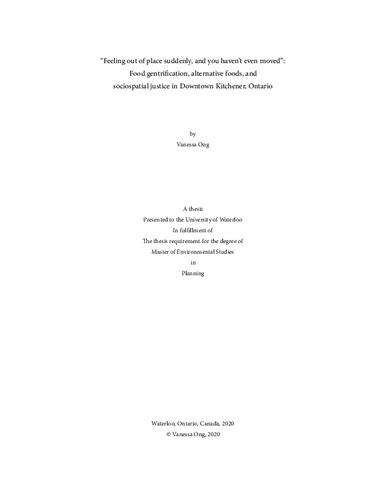 In recent years, alternative food practices have gained popularity among urban sustainability planners as a way to promote environmentalism and attract affluent residents to the city core. As Slocum (2006) describes, “alternative food practices [are] those that advocate more ecologically sound and socially just farming methods, food marketing and distribution, and healthier food options”, with the goal of confronting controversial issues associated with corporate food (p. 522). However, critical urban scholars and activists have grown concerned about the complex ways in which food might be implicated in gentrification and urban inequality. As shown through the literature review, “food gentrification” is a newly developing concept, which can describe the “upscaling” of traditionally affordable foods, a rise in property prices in the surrounding areas of alternative food initiatives (AFIs), or a loss in affordable food sources due to changing population characteristics and demands. Through a qualitative, mixed- methods approach, this thesis thus explores the relationship between food and gentrification in the rapidly changing urban centre of Downtown Kitchener, Ontario. This study asks: “How do low-income residents experience food gentrification in a rapidly changing urban area?”. To answer this question critically, two manuscripts are used to analyze the research topic through the lenses of public health and urban planning. The first manuscript looks at the food agency of low-income longtime residents, to assess the potential impacts of food gentrification on health. The second manuscript explores how food might play a role in the way that residents build a sense of place in the city, with a focus on how AFIs might better address matters of sociospatial equity. A number of tools and recommendations are provided, which are fundamentally grounded in the life stories of the low-income longtime residents who participated in this study. These multi-scalar solutions can help planners and policymakers address food security, food environments, and city change in an interdisciplinary way.