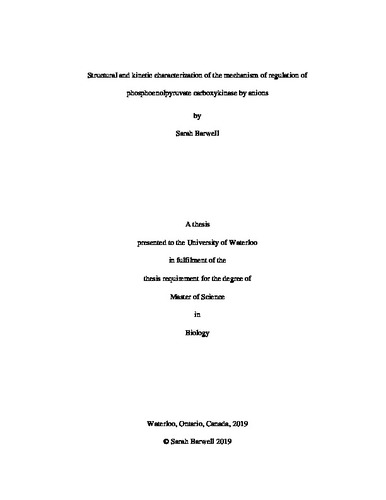 Phosphoenolpyruvate carboxykinase (PEPCK) catalyses a reaction that is known to be thermodynamically reversible. In contrast to this thermodynamic reversibility, in eukaryotes, PEPCK is observed to primarily catalyze the forward direction, converting oxaloacetic acid to phosphoenolpyruvate as one of the principle steps in gluconeogenesis. Based upon these seemingly conflicting pieces of data, we hypothesize that there must be an underlying mechanism regulating the kinetic reversibility of the catalyzed reaction in vivo. To this end, we present structural and kinetic evidence for the presence of an allosteric site in PEPCK, which we propose binds negatively charged ions such as chloride which is found in abundance in vivo. This allosteric regulation serves to inhibit catalysis in the reverse direction and contribute to the observed unidirectionality in the direction of PEP synthesis in vivo. As supporting evidence for this hypothesis, we have collected anomalous diffraction data on several PEPCK crystals that have been exposed to a range of iodide concentrations. From the corresponding anomalous signals at each concentration, we were able to analyze anomalous peak heights and generate binding isotherms for various anion binding sites on PEPCK. Importantly, one of these anion binding sites was observed to titrate with increasing iodide concentration, yielding an apparent binding constant similar to that obtained from our kinetic inhibition studies. This site was in contrast to the others which were shown to not titrate over the same range of iodide concentrations. The anomalous data in combination with the kinetic data were essential in assigning the allosteric mechanism of regulation as the origin of the observed inhibition. This result was in contrast to preliminary anomalous maps calculated at saturating concentrations of iodide which suggested anions binding to the active site in a purely competitive fashion. This allosteric mechanism of inhibition was further validated through additional anomalous diffraction and kinetic studies on three mutant enzyme variants, giving strong support for the proposed mechanism of regulation, an effect that has interesting biological ramifications for the in vivo functioning of PEPCK.

Sarah Barwell (2019). Structural and kinetic characterization of the mechanism of regulation of phosphoenolpyruvate carboxykinase by anions. UWSpace. http://hdl.handle.net/10012/15344