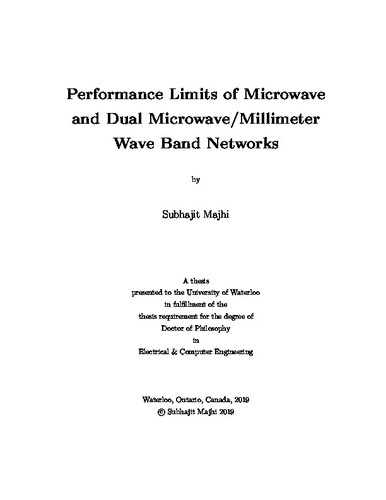 Traditionally, wireless networks communicate over the conventional microwave band (sub-6 GHz) as it supports reliable communication over a large geographic area. The ever increasing demand for bandwidth to support the rising number of consumers and services, however, is fast depleting the available microwave spectrum. As such, complementing the microwave spectrum with additional bandwidth from the millimeter-wave (mm-wave) band has been envisioned as a promising solution to this problem. Since transmissions in the mm-wave band are typically achieved with highly directional steerable antenna arrays to counter the severe path-loss in mm-wave frequencies, the resulting mm-wave links are typically rendered highly directional, which can often be modeled as directional point-to-point links. However, mm-wave transmissions are inherently unreliable compared to those in the microwave band. Hence, communicating simultaneously over both bands in an integrated mm-wave/microwave dual-band setup is emerging as a promising new technology. In this dual-band setting, high-rate data traffic can be carried by relatively unreliable high-bandwidth mm-wave links, while control signals and moderate-bandwidth traffic can be communicated over the relatively reliable microwave band. In this thesis, we first study two dual-band multi-user networks that model two important aspects of wireless communication: inter-user interference and relay-cooperation. The broad goal of this study is to characterize information-theoretical performance limits of such networks, which can then be used to obtain insights on the optimal encoding/decoding strategy, effective resource allocation schemes, etc. In the first part of this thesis, we study a two-transmitter two-receiver dual-band Gaussian interference channel (IC) operating over an integrated mm-wave/microwave dual-band. This channel models a setting where a pair of single-transmitter single-receiver links communicate simultaneously, and thus mutually interfere. Here, transmissions in the underlying microwave band are modeled as a two-user conventional Gaussian IC (GIC). In contrast, a transmitter in the mm-wave band is assumed to be capable of communicating to either the desired destination or the interfered destination via a point-to-point direct-link or a cross-link, respectively. The dual-band IC is first classified into 3 classes according to the interference level in the underlying microwave GIC, and then sufficient channel conditions are obtained under which the capacity region of the 3 classes are characterized. For cases in which the sufficient conditions do not necessarily hold, approximate capacity results are obtained that characterizes the capacity region to within 1/2 bit per channel use per user. The performance of the dual-band IC is likely to be impacted significantly by the point-to-point nature and large bandwidth of the mm-wave links, and specifically by whether the mm-wave spectrum is used as direct-links or cross-links. Transmitting in either the direct-links only or the cross-links only is not optimal for all channel conditions, and there exists a non-trivial trade-off between the two modes. To understand the impact of this trade-off on the performance of the dual-band IC, we study the power allocation scheme over the mm-wave direct and cross-links that maximizes the sum-rate of the channel. The resulting power allocation strategy is characterized in closed form, which possesses rich properties and reveals useful insights into the trade-offs in such networks. In the second part of this thesis, we study a fading Gaussian multiple-access relay channel (MARC) over an integrated mm-wave/microwave dual-band, where two sources communicate to a destination with the help of a relay. In the dual-band MARC, transmission in the underlying microwave band is modeled as a conventional Gaussian MARC. However, similar to that in the dual-band IC, a mm-wave transmitter in this channel is modeled as being able to communicate to either the destination or the relay by creating a direct-link or a relay-link, respectively. For dual-band MARC, we characterize an achievable region and a set of rate upper bounds, and then obtain sufficient channel conditions under which its capacity region is characterized. Similar to the dual-band IC, the performance of the dual-band MARC will likely be significantly affected by whether the mm-wave band is used as direct-links or relay-links, and a non-trivial trade-off between the two modes exists in this case as well. To understand this trade-off, we study the transmission power allocation scheme over the mm-wave direct and relay-links that maximizes the sum-rate of the dual-band MARC. The resulting power allocation scheme, characterized in closed form, is observed to have rich structural properties, which reveal insights into the trade-offs in relay cooperation in dual-band networks. While dual-band communication is a promising technology, currently the bulk of the connectivity is still supported by the microwave band. However, the problem of interference mitigation for conventional microwave bands is still open even for the basic case of a two-user IC. Motivated by this, in the third part of the thesis, we study the performance limits of the multiple-access interference channel (MAIC) which models the interference during cellular uplink over the conventional single band. Focusing on the weak interference case, which provides a more realistic model of the inter-cell interference, we characterize an achievable strategy and 3 novel upper bounds on the sum-rate in the partially symmetric case, thereby providing improved sum-rate upper and lower bounds in these cases.