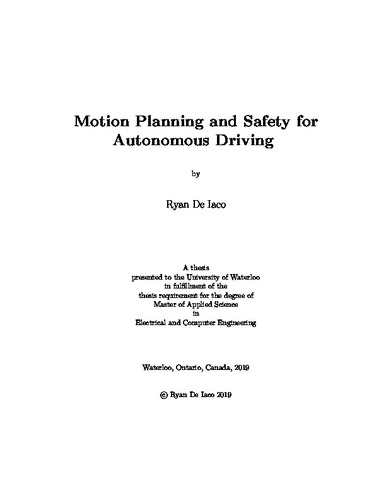 This thesis discusses two different problems in motion planning for autonomous driving. The first is the problem of optimizing a lattice planner control set for any particular autonomous driving task, with the goal of reducing planning time for that task. The driving task is encoded in the form of a dataset of trajectories executed while performing said task. In addition to improving planning time, the optimized control set should capture the driving style of the dataset. In this sense, the control set is learned from the data and is tailored to a particular task. To determine the value of control actions to add to the control set, a modified version of the Fréchet distance is used to score how useful control actions are for generating paths similar to those in the dataset. This method is then compared to the state of the art lattice planner control set optimization technique in terms of planning runtime for the learned task. The second problem is the task of extending the Responsibility-Sensitive Safety (RSS) framework by introducing swerve manoeuvres in addition to the nominal braking manoeu- vres present in the framework. This includes comparing the clearance distances required by a swerve to the braking distances in the original framework. This comparison shows that swerve manoeuvres require less distance gap in order to reach safety from a braking agent in front of the autonomous vehicle at higher speeds. For more realistic swerve manoeuvres, the kinematic bicycle model is used rather than the 2-D double integrator model consid- ered in RSS. An upper bound is then computed on the required clearance distance for a swerve manoeuvre that satisfies bicycle kinematics. A longitudinal safe following distance is then derived that is provably safe, and is shown to be lower than the following distance required by RSS at higher speeds. The use of the kinematic bicycle model is then validated by computing swerve manoeuvres with a dynamic single-track car model and Pacejka tire model, and comparing the single-track swerves to the bicycle swerves.